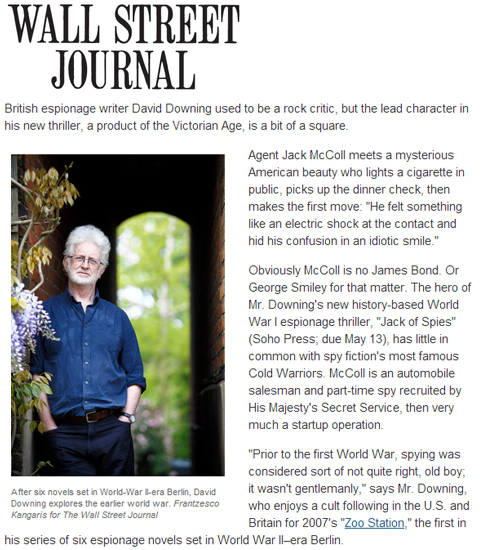 The Wall Street Journal profiled David Downing Friday, in advance of next week’s release of Jack of Spies, the first book in a new series set on the eve of World War I and starring British spy Jack McColl.

Here’s the Journal on the the circumstances surrounding the dawn of the espionage era:

“With war looming, Britain patched together a spying apparatus that took advantage of newly popular technologies like the telephone and camera. They used a lot of amateurs to help them. If a businessman was going on a trip to Russia, say, they’d call him in and ask him to look into things for them.

In McColl’s case, a shadowy figure working out of a small, little-noticed office in the Admiralty offers him a couple of hundred pounds in expense money if he will do some sleuthing during a round-the-world trip to sell a luxury car, the Maia, to wealthy clients in China and the U.S., among other places.”

Downing, who is about to embark on his first North American tour in support of Jack of Spies, is the author of nearly 80 books, including historical books for children, nonfiction books about soccer, military histories, as well as show business biographies. His celebrated John Russell WWII spy thrillers, a six book series set in Berlin, is a favorite among historical crime readers in the U.S.

But Jack of Spies promises to bring the author widespread acclaim.

“For an author of contemporary spy fiction, this period is almost virgin territory when compared with later years mined by spy novelists Mr. Downing admires like Eric Ambler and Alan Furst.

The First World War is usually about the trenches and all that goes with it,” he says. “I want this book to also show all the things that were intertwined with the era but don’t get much notice.

“Jack of Spies,” which may benefit from interest in the Great War centennial this year, will ship 20,000 hardcovers. “

If you have a Wall Street Journal subscription, click here to read the entire profile.

You can also read an excerpt from Jack of Spies, and find information about David Downing’s book tour, writing influences, and more, here. 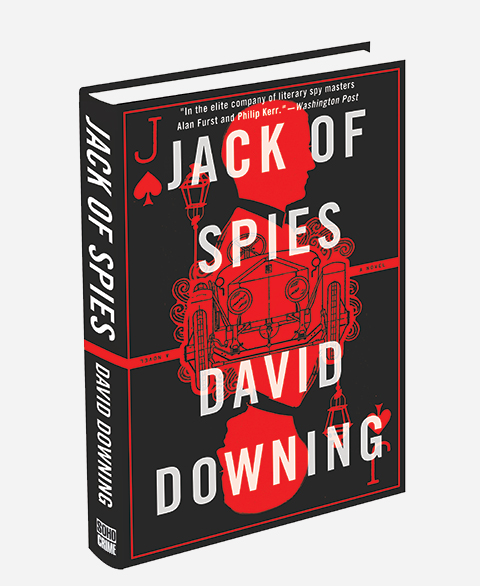