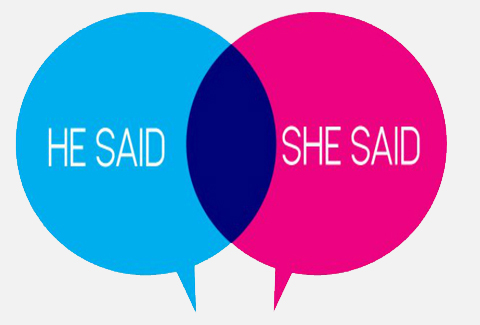 And Then He Said …

“One line of dialogue that rings true reveals character in a way that pages of description doesn’t.”—Anne Lamott, Bird by Bird

When you get down to basics, there are really only two kinds of writing in a novel: narrative and dialog. Good dialog does many things: it moves the story along, it tells us something about the character who is speaking, it entertains us.

(It also breaks up the page—I personally am less attracted to a page of dense type that’s all margin-to-margin, with no dialog to open it up. If I flip through a book in a bookstore and see acres of uninterrupted narrative, especially in very long paragraphs, I’m probably not going to buy the book.)

Sooner or later, probably sooner, your characters are going to start to talk to each other or, on occasion, to themselves. When you start to write their dialog (or when it starts to write itself—some characters just won’t shut up), there are some things you want to keep in mind.

Dialog should reflect character. If you’ve got a Mafia tough guy who talks like an Oxford historian or a sweet little girl with a mouth like Susan Silverman’s, you should really have a reason for it. Dialog should reflect character in many ways: tone, word choice, rhythm, complexity (or the lack of it), perspective, and, most important, what’s actually said. There are thousands of possible responses to any question or statement, thousands of possible reactions to any event. What your character says, and does, should be consistent with who he or she is. (Of course, it could also be consistent with who he or she is pretending to be.)

Dialog should be like real talk, only better. I’m fortunate enough to know a lot of interesting people, and most of them are boring some of the time. I also know a lot of uninteresting people, who are boring almost all the time. (If you’re reading this, and I know you, you’re in the interesting group.) Most real-life conversation wanders around the point, if there is one, to an extent that readers won’t accept. They have better things to do. They endure enough boring conversations in real life not to have to put up with more of them in books. The trick here is to preserve just enough of the elliptical nature of real conversation to make it sound like talk instead of writing, but to cut most of it and get to the point. And when you’re finished with the dialog in a scene, go back later and see what else you can cut. Generally speaking, shorter is better.

Writing an intentionally boring character can be tricky. Boring talk can be used effectively—for example, it can make us laugh, or it can make us crazy with suspense when it delays an important payoff or slows action that the reader knows has to move faster, or something terrible might happen. But, as I say, it’s tricky. As a general rule, I’d suggest you not have too many intentionally boring characters.

Dialog should advance the story. This is so obvious that I thought twice about including it. But then I remembered all the times I had to face the necessity of cutting some dialog I thought was wonderful because it slowed … things … down. I rarely feel more clever than I do when my characters are talking really well. It’s very easy for me to follow the flow of the conversation with the same kind of enjoyment I’d get from the dialog in a really good movie (at these times, it usually feels like I’m hearing the words and trying desperately to get them down, rather than making them up myself). It’s all I can do to type fast enough to get the words on the page.

And by the way, writing dialog is one of the best ways to learn about your characters.

“I Love You,” Jack Rasped Urgently

The sentence above, besides being profoundly tone-deaf, breaks two of my personal rules. First, the word to use after dialog, 99 percent of the time, is “said.” Secondly, “said” should almost never be modified by an adverb.

First, any word but “said” calls attention to itself. It reminds people that they’re reading writing. Readers skip “said.” They don’t see it. But they see words like “proclaimed,” “insisted,” “asserted,” “demanded,” “whimpered,” “panted,” “ejaculated,” “interjected,” “interrupted,” “whooped,” “shouted” —well, you get the idea. “Said” is invisible. Other words put the writer in the picture.

They can also become really, really irritating, especially when it’s obvious that the writer is ransacking his or her mind for yet another synonym for “said.” Don’t worry about the repetition. One more time: Readers skip “said.”

Another one to avoid at all costs is “questioned.” “’Why?’ she questioned,” is absurd on first reading. But not, apparently, on first writing. I’ve seen it repeatedly.

And the adverbs? Well, they just shouldn’t be necessary. The words and the tone of voice should tell us what we need to know about how the line is being spoken. “Stop or I’ll shoot” is unlikely to be said caressingly. “You make me want to be a better man” is probably not being bellowed.

A decision to stick with “said” and avoid the adverbs will force you to write better dialog. And, sure, there will be times that a character has to shout to be heard over some sort of noise, and it’s okay to tell us that he or she is shouting. There will be scenes in which it’s important for us to know that the way a character says something is at odds with the words he or she is saying. “I love you,” Jack shouted,” or “I love you,” Jack sneered tells us something we can’t get from Jack’s line. But it’s also possible to show us something Jack’s doing as he says the line—something that contradicts the words he’s saying—and that’s an option worth exploring.

Whose Line Is It, Anyway?

Even if you manage to make your characters all sound different, there are times you’re going to help the reader out by telling him or her who’s speaking. This is especially true in scenes with more than two people in them.

But you still don’t want “she said” and “he said” to be littered all over the page. What do you do?

First, don’t use it if you think it’s obvious who’s talking. Let other people tell you whether you need it.

Third, show us the character doing something as she or he talks. Something as simple as, Jack nodded. “I’m beginning to understand.” Or a little more elaborate. Jack picked up the telescope and polished the tube with his sleeve. “I’m beginning to understand.” This has a couple of advantages. First, it tells us who’s talking and eliminates a “said.” Second, it gives us something to look at; it puts us back into the scene.

By the way, I’m tired of Jack.

Ed. note: This is the thirteenth post in a series. Check out the Table of Contents to see what’s in store, and be sure to come back next week for a new installment.