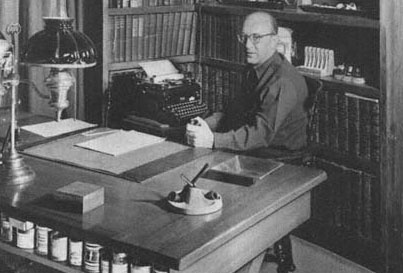 “When in doubt, have a man come through the door with a gun in his hand.” —Raymond Chandler

Dolores and Jack (remember them?) are finally having it out. Dolores wants Jack to give up his maniacal pursuit of the random fingerprint generator, move to a cabin in the woods, and live the simple life. She’s concerned about the damage he is doing to himself. Jack has seen the way Dolores’s eyes light up when she hears the words, “Prada” and “Gucci,” and he’s certain she’ll be out of that cabin and on her way back to New York in the time it takes to tie the knot in an apron. He’s terrified at the prospect of losing her.

Also in the room is Jack’s sometime partner, Ladislaw, whose middle-European accent originally seemed like a great idea, but now gives you brain-cramps every time you have to write it. Ladislaw abandoned his wife, his child, and his rewarding life as a Transylvanian peasant to help Jack pursue the machine, so he’s pretty heavily invested in the outcome of the conversation.

This is a Big Scene. You’ve been laying the scaffolding for it over the course of a hundred pages or so. You’ve listened diligently to Jack and Dolores (and Ladislaw, when you can understand what he’s saying), and you’re convinced that you’ve been true to them. They’ve gotten to this point without any of them being forced to do anything that was out of character. The next fifty pages of the book depend on this scene.

And it won’t move.

It doesn’t happen. It’s got no life. Your characters are so inert they might as well be preserved in aspic. You can’t even see the room they’re in, much less hear their voices. The whole thing seems to be happening in a bell jar.

You’ve got a dead scene on your hands.

I’ve written hundreds of these. Some of them, I’m ashamed to say, even found their way into a completed book, where they linger like food stains on a tie that I convinced myself no one will notice. But everyone notices. The food stain might as well be an entire lamb chop. Years later, I take one of my books off the shelf and it magically falls open, like the clue in a bad mystery, directly to the offending scene, and the scene opens its greasy maw and leers at me.

The immediate problem with a scene like this is that it can stop you writing. It can block you. Whatever you do, you can’t allow that to happen.

So deal with it. Here are some of the ways I suggest you do that.

Focus on another character.

If you’ve been writing the book mainly from the point of view of Dolores, look at Jack. If you’ve been mainly inside Jack’s mind, look at Dolores. If you can bear to do so, take a harder look at Ladislaw. Consider the scene purely from the perspective of that character. What does he/she want? What is he afraid of? What will she do to get her way? Where did the character come from before he arrived wherever the scene is taking place? Depending on the outcome of the scene, where will he go next? What does he have in his pockets? What does she have in her purse? (I’m not kidding.) How has the character planned for this encounter? What’s the character’s fundamental frame of mind—angry, determined, frightened, weary, uncertain?

Much of the time, doing this will bring the scene to life by taking the ball away from your primary character and giving it, at least momentarily, to the character you’ve been considering. You’ll suddenly get an idea about what he or she might do or say. It will surprise the other characters (why not? it surprised you), and they’ll react. They’ll come alive. You can use this infusion of vitality to move the scene forward. If necessary, do this for every character in the scene, including the minor ones—the waitress who’s serving the sheep’s testicles du jour in Ladislaw’s favorite Transylvanian restaurant. Who the hell knows? A lapful of steaming sheep’s testicles may be the galvanic shock one of your characters needs.

Bring in one of the characters later.

Ladislaw and Jack are alone in the restaurant. Ladislaw is urgently communicating an idea that could get them the machine once and for all. Jack is leaning forward, concentrating with all his being to figure out what Ladislaw is saying. In comes Dolores, with the bombshell: Jack, quit, or I’m leaving you. This kind of energy interrupt can pick up a scene by its suspenders and get it moving.

Remember, we don’t need to see everyone arrive. We don’t need to know what the seating chart is. We don’t need to know that it’s raining or that it was hard to get a cab. We don’t need to hear the waitress recite the day’s specials, especially not in that restaurant. Cut to the point at which the action begins to rise in pitch, let it flow, and fill in later whatever you need to fill in. (You may find you don’t actually need any of it.) Remember: scenes that open wrong often continue wrong. Find the right opening, and you’ll often find the scene.

On the same principle:

Find something that’s interesting to look at, and use it to open the scene. The day’s specials filled a blackboard on the wall, written in a language that looked to Jack like loops of yarn. So there you are—you’re in the restaurant, Jack’s there, there’s already a mild mystery—what in the world are the day’s specials? —and we’ve introduced the idea of a foreign language, which is more or less what Ladislaw is speaking. That’s a lot for one sentence, and it sets up some of what’s to follow. And who knows, maybe the idea of a foreign language will play out through the entire scene; the characters are so far apart they really are speaking different languages. They need to understand one another before the story can move forward.

Your problem may be that you’re so caught up in what the scene needs to do that you’re not paying enough attention to how it does it. Here’s Raymond Chandler, in all his glory: What readers are looking for is not, for example, that a man got killed, but that in the moment of death he was trying to pick up a paper clip from the polished surface of a desk and it kept slipping away from him, so that there was a look of strain on his face and his mouth was half opened in a kind of tormented grin, and the last thing in the world he thought about was death. He didn’t even hear death knock on the door. That damn paper clip just kept slipping away from his fingers and he just wouldn’t push it to the edge of the desk and catch it as it fell. Find the paper clip on the table. Maybe, in this case, the utensils next to the plates include a tiny pitchfork. (I don’t know what Transylvanians eat with.) Maybe the pitchfork is your paper clip. Maybe it’s Dolores’s compact. Maybe it’s Ladislaw’s accent. But remember that this isn’t just three people in a room. There are thousands of specifics you can use to bring the scene to life.

Put the whole thing on the back burner and do something mindless, something that gives you a feeling of accomplishment without putting a drain on your mental resources. Rake the yard, if you have a rake and a yard. Vacuum. Organize all that crap under the kitchen sink. Do not catalog books or try to get a grasp on Einstein’s Theory of Special Relativity. You want to let your mind alone. It has work to do, and sometimes it does it better when you’re not looking. Or, as I suggested earlier, take a shower.

You can also try all the things I offered in the piece called “Losing Interest”: Writing about the scene, outlining the scenes that led up to it, examining what’s at stake, asking yourself what you most care about in the scene and making sure it’s on the page.

If absolutely none of this works, then:

Get it on the page anyway, in all its awkward, lifeless glory. You can always rewrite it. At least you’ve got something. You’ve learned one way not to write it. The enemy is not the bad page, it’s the empty page.

Just remember: Before you decide that the book is finished, you need to take that tie to the cleaners.

Ed. note: This is the twenty-sixth post in a series. Check out the Table of Contents to see what’s in store, and be sure to come back next week for a new installment.