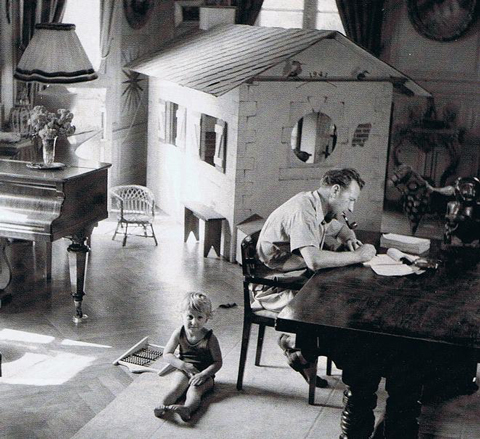 “In writing, habit seems to be a much stronger force than either willpower or inspiration. Consequently, there must some little quality of fierceness until the habit pattern of a certain number of words is established. There is no possibility of saying, ‘I’ll do it if I feel like it.’” —John Steinbeck

This piece is intended to help you set up a writing routine, keep writing until you type THE END, and then move on to the next book. It’s going to repeat a lot of material from earlier sections, but then you probably didn’t read them anyway. You may find you need none of these suggestions and you will probably evolve your own productive routines. However you do it, I wish you the best of luck.

“I could write a book if I just had the time.” Or, “I’ve always wanted to write, but I don’t have the time.” Whenever I hear either of these statements, I have to make a physical effort to keep from sticking my fingers in my ears.

Look, every novelist in the history of literature wrote a first novel. (If someone can figure out how to avoid it, please share it with the rest of us.) The vast majority of these first novels were written by people with families, responsibilities, and full-time jobs. So were most second and third novels.

I wrote my first six novels while more than fully employed in a job that usually called for fifty-hour weeks and nonstop airline travel – a hundred thousand miles a year or more. Anthony Trollope (you remember – the one who set up a clock every morning and wrote until the time was up; even if he finished a novel, he went straight to work on a new one) spent the first half of his writing career working for the British post office. In fact, he invented the public mailbox. He worked from four to seven every morning. By candlelight. With that clock ticking at him.

There’s a guy who wanted to write.

If you think you have a book in you, there’s only one way to get it out. Make the time, turn it into a routine that can be disrupted only by war or earthquakes, and stick to it. Write as if your life depended on it, because your creative life actually does.

Inspiration comes most often to people who are working at their craft. And I don’t mean working at it when the clouds part and a large finger points down at you and a disembodied voice says, “Here’s a great beginning for chapter two.” I mean working at it day after day, whether you want to or not. So what if it feels like drudgery sometimes? Get used to it. Drudgery often sets the stage for the inspiration, and inspiration drives the drudgery forward. I firmly believe that you won’t write well if you don’t write often.

This is what I suggest you do.

Set aside a regular time for writing, and for writing only. It should be a minimum of four sessions a week (five or six would be better) and a minimum of two hours per session (three to five would be better). During this period, as Raymond Chandler says, all you can do is write. You don’t have to write, but you can’t do anything else. Finish when you know where you’re going next. Never end a writing session with the end of a chapter, unless you’re dying to start the next one and you know exactly how to do it.

Start by reviewing your past couple or three days’ worth of work. It’ll get you up to the terrifying snowy wilderness of the blank page more gently. It will reacquaint you with where you were and refresh your sense of the tone and rhythm you had established. Perhaps most importantly, it gives you a chance to do some rewrite on the fly.

If you can’t move ahead with your chapter, write something else that has to do with your book. If you can’t move the scene along even after you use the block-breakers listed below, do character sketches, descriptions of settings, an outline of what you’ve done so far, a scene that’s somewhere in the future, a bunch of noodling about the central issue of the book, a little meditation on what’s at stake. Anything that deepens your understanding of what you’re writing about.

Carry a notebook all the time. When you get an idea, write it down. Next time you sit down to write, look at those notes, figure out how to use them, or mark them for later use and drop them into the bucket – the box, or notebook, or computer file — whatever the catchall is for your book.

Print out your pages weekly or every two weeks at most. It makes a psychological difference to see those nice neat pages stack up. Don’t bother reading them until you’ve got 50 or more — just revise in the computer, and print out your newer drafts, throwing away your older ones. And, yes, you’re going to go through a lot of paper. Buy several reams. There’s something energetic in the sight of those tidy, rectangular packages, all those pages with nothing on them but potential.

Once in a while, take a break from the computer and read your work on the page. It looks different there. Read it once without making any changes and then again with a pencil in your hand. Then input the changes.

Find somebody to talk to—someone you trust, who will support you creatively. It’s amazing sometimes how ten minutes of reviewing a problem out loud will lead you to the solution, and even just giving another person a verbal update on where you are in your story can show you the strong and weak points and suggest next developments. You could do this in a writing group or with a single very nice person.

Back up your work religiously. Get the backups off your computer, out of your house. (As I learned, houses can burn down.) Back up to CDs, DVDs, portable drives, camera memory cards, gift-wrap ribbon if you can figure out a way to write to it. E-mail your work to yourself. If everything in the world goes wrong, your work will still be sitting there on Google.

Zero pages per day brings the average way down.

For everyone who’s actually finished something, there are literally hundreds of make-believe writers, the kinds of people who take a laptop to a coffee house as a pickup tool or who talk a book a day but never put two words together on paper. Avoid all make-believe writers. They’re Kryptonite to people who actually intend to write a book. Don’t hang around with them. Don’t write next to them. They’ll leach your energy, disrupt your concentration, and offer you useless ideas.

This is not to say that you can’t work someplace cool, dressed in black. I’m sure many good books have been written by people dressed in black. Hell, I’ve written dressed in black, although it was usually by mistake. Just don’t look so cute that people keep hitting on you. It’s not good for the concentration.

You also want to avoid theorists. Nobody who says things like “post-modernist” or “anti-hero” or “deconstruction” is actually writing a book. And if he or she is, you don’t want to read it.

When you’re writing, you’re alone. It’s you and the page, even if you’re surrounded by people. If, like me, you like to write in public places, choose them well, and be even more careful about choosing the people you write around.

Sooner or later you’re going to get stuck. It’ll be over something small—a plot point, a line of dialog, a character inconsistency—or something big: for example, you suddenly hate every word you’ve written and also all the ones you haven’t written yet.

The thing to do is get past it. It can’t actually stop you unless you let it.

If you let it stop you long enough, you’ll lose your book.

For more about this problem, look at the pieces in the “Getting Out of Trouble” section. In the meantime, here’s a brief recap.

Check your characters. Are you making them do things they don’t want to, just to move the plot along? There may be a quicker way to wreck a book, but I don’t know what it is.

Change your point of view. Rewrite the scene from another character’s perspective. Write it fast — you’re not going to use it — and see if this new knowledge about one of your characters doesn’t suggest something.

Write your problem. Start a fresh page with the statement: “I’m having trouble because . . . “ and finish it. Sometimes nothing will come to you immediately, so just write anything, no matter how silly, as long as it has to do with one of three things: your story, your characters, your setting. Much of the time you’ll come out of this exercise with the problem solved.

Take a walk. Get out of the house and walk, working on the scene mentally. This activity will frequently open up your perspective. Or shower. Or do your nails, or someone else’s. Just don’t do anything that engages your mind. You want it to be working quietly, while you’re not looking.

Call for help. This is where that person you can talk to comes in. Tell him or where you are and why you think you’re stuck. Describe your characters and what they want from the scene. See what happens when you hear all this out loud.

If all fails: Back off and look at the scene from a higher perspective—the 5000-foot view. Do you need it? Does it advance the story? Does the reader learn something about the characters? Look again at your shortest description of what your book is about. What does this scene have to do with that? If the answer is, “Nothing,” then dump the scene and come up with another one.

Write the damn thing anyway. Then move on. Come back to it when you’ve got a little more perspective. The worst thing that can happen is that you’ve discovered one way not to write that scene.

And whatever happens, keep writing.

The two best ways to learn to write are writing and reading. You should be doing both.

Read widely and often. Read novels. Read novels that are a little like yours and novels that have nothing whatsoever in common with yours. Read for fun, but also read to see how the writer is doing whatever he or she is doing. Look at the structure of the book. Look at the relationship between narrative and dialog, between description and the character’s points of view. Look at the way time is handled. Look for solutions to any kind of creative challenge you’re having trouble with.

When you see something you like, make a note. Underline. Highlight. Put one of those annoying little sticky notes on the page. Keep the books that teach you the most somewhere accessible, somewhere you can get at them when you need to steal I mean, learn—from them.

And e-mail me an invitation to your first bookstore reading.

Ed. note: This is the twenty-ninth post in a series. Check out the Table of Contents to see what’s in store, and be sure to come back next week for a new installment.