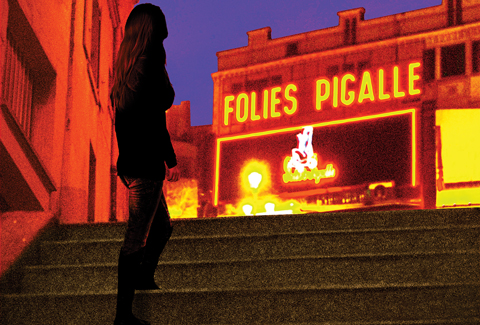 As the weather fluctuates between 4 and 32 degrees with wind chill here in New York, I find myself missing the winter I spent in Paris during my year abroad. It was heavy coat weather and the snowiest winter in decades, but still not so cold that your face hurt.

It’s not often that I allow myself to think about that year, lest it lead me to jump on a plane to Charles de Gaulle, rent out a tiny chambre de bonne in the 16th arr., and spend the rest of my days doing odd jobs and leisure reading in one of several gorgeous Parisian parcs.

When I first opened up one of Cara’s books, I realized that I had always wanted to be like Aimée Leduc—unstoppable, supremely fashionable, blessed with both a French and American identity, and living in the most beautiful city in the world—although I could perhaps leave or take facing constant mortal peril. Aimée’s Paris is different from the Paris I knew: people still used francs, didn’t have smartphones, and were much less politically controversial. But it’s lost absolutely none of its charm.

For my fellow Francophiles out there, Cara has a new website, one befittingly chic of the author and her books. She will also be starting her national tour next month for MURDER IN PIGALLE, which is a major contender for my favorite book in the series. Do feel free to stop by an event and chat with Cara, as she is quite fun and knowledgeable about the City of Light.

So if you find yourself feeling particularly Parisian one day but can’t whisk yourself away to Paris on a whim, try out MURDER IN THE MARAIS. I think you’ll enjoy where the book takes you.