Peter Lovesey Sets the Tone for THE USUAL SANTAS 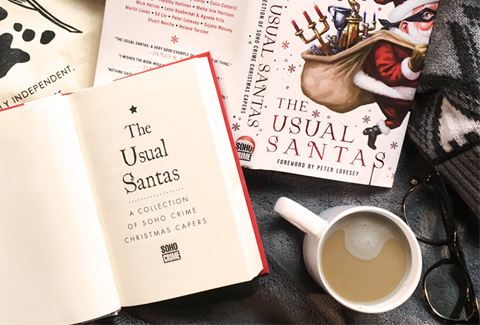 Mystery  lovers, it’s time to get merry. The Usual Santas is the perfect stocking stuffer for the crime fiction lover in your life! This captivating collection, which features bestselling and award-winning authors, contains laughs aplenty, the most hard boiled of holiday noir, and heartwarming reminders of the spirit of the season.

Upon the first of all Christmases, St. Luke tells us, the Angel of the Lord appeared at night to some startled shepherds in a field and informed them of the momentous event in the city of David. As if that were not enough of a shock, a multitude of the heavenly host then manifested itself praising God and declaring “on earth peace, goodwill toward men.”

The world’s religions almost all provide occasions for expressing goodwill toward men—and women—most commonly in midwinter. The Pagan festival of Yule predated Christmas. Worldwide celebrations around the year’s end include Hanukkah, Kwanzaa, Pancha Ganapati and the Chinese New Year. Families come together and there is a break from the monotony of work to indulge in ceremony, feasting and the exchange of gifts. Disbelievers like me are only too happy to join in.

But not without exception.

Crime statistics spike at this time of year. The seasonal shopping spree provides rich pickings for thieves and fraudsters. Well-stocked stores become tempting targets for stick-up men and shoplifters. Pockets are picked, shoppers mugged, cars broken into and Christmas tree plantations raided. Cyber criminals relieve the unwary of their savings. Scam emails masquerade as greetings cards. Empty homes are ransacked. Drink-fuelled assaults are common. And even when the run-up to the holiday ends and the streets become more peaceful, domestic violence increases behind locked doors. Family feuds are revived by stressed-out, not-so-merry merrymakers.

All of this is rich material for crime writers. I believe Christmas has inspired more short stories than any other theme. From Sherlock Holmes to Jack Reacher, every crime series character of note has been involved in a festive mystery. It’s no surprise that when Soho Press invited its authors to contribute to The Usual Santas, the office on Broadway was inundated with stories.

From its beginning in 1986, Soho has set out to publish the best of international crime fiction, so this festive collection is unlike any other in that the writers live in four different continents and have chosen to interpret the seasonal theme in the most colorful and exotic plots imaginable. You will be transported to Sweden, North Korea, Thailand, Ireland, New York City, Utah, Italy, France, Denmark and England. And you will time-travel to Cesena in the era of the Borgias, Bath when Jane Austen resided there, Paris at the close of the nineteenth century, a prison camp in the darkest days of the Korean War and Armagh during Northern Ireland’s Troubles. For readers looking for the traditional Christmas, there is snow, Santa Claus (in numbers) and the birth of a child. Those with a taste for noir will find it in the shape of cunningly plotted killing, casual murder, assassination and dismemberment. And still there is room for heart-rending suspense and hot romance between the world’s greatest consulting detective and the one he always called the woman.

For me, one of the joys of the festive season is the opportunity to give and receive surprises. I won’t spoil yours as you turn these pages, but I’d better warn you there are shocks in plenty. Nothing will top the appearance of the heavenly host to those hapless shepherds, but there is plenty here to get your heart thumping.

To read more about the The Usual Santas, visit the book page.