Read an Excerpt: Don’t Eat Me 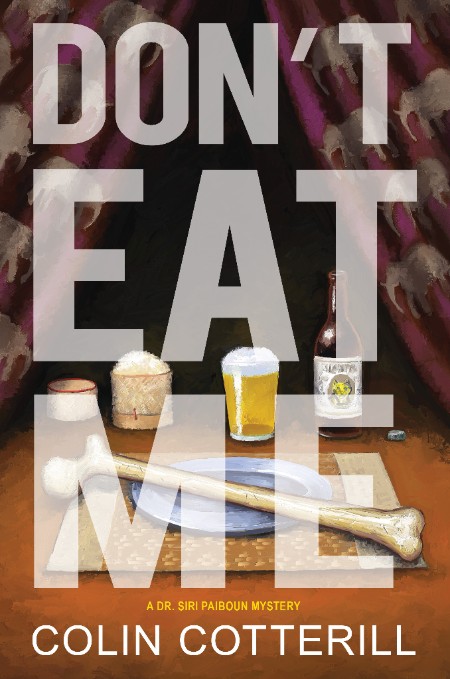 This whole thing started and finished with her. She was in a crate. A compact coconut wood coffin with narrow slits for air. She’d screamed over and over to no avail. She’d tried to make sense of it. She’d counted the unblinking eyes. Nineteen of them. One eye too many or one too few, but nineteen by every reckoning. And even though there was no light beneath the thick tarpaulin those eyes glowed deep yellow like dying stars.

When she came around that last time she thought she was still in the nightmare and in a way she was. Her knees were tucked up tightly against her chest and there was no more than a shoebox of space at the foot of the crate, but the creatures—the nineteen-eyed creatures—had contracted somehow and packed themselves together so closely there would be no contact with her. Not yet. She could feel their hot breaths against her bare toes. She could hear the wheezing in their throats. But they stared at her, unmoving, waiting for her to lose consciousness again because it was inevitable she would. They would bide their time until she had no more fight in her. Then, and only then, they would devour her.

Life sped by in Vientiane like a Volkswagen van on blocks. The streets were crusty with red dust, the uneven sidewalks sprouted half-hearted weeds, and the people neither smiled nor raised their voices for fear of drawing attention to themselves. You could never be sure who was listening. They all knew of someone who’d fled the country and at least one person who’d disappeared. Many had relatives in refugee camps on the Thai side of the border. Many more had ambitions or dreams or plans to join them but lacked the spunk.

This was year five of a socialist experiment that had failed the People’s Democratic Republic of Laos in many ways. The Communist vessel was holed and on its way down. The rice collectives program had collapsed. Government workers went unpaid for months. And Thailand had once more closed its Mekhong border due to pissy spats over trespassing and accusations of insurgencies, and, never forget, good old historical animosity. The river guard patrols on both banks had been doubled, but it was a vast river and still the midnight rafts of smuggled Thai goods floated diagonally north on the current, crisscrossing disgruntled Lao heading south on their rubber inner tubes.

So it was a surprise to many on one humid night in August when two elderly Lao gentlemen were spotted paddling their bamboo raft in a northerly direction toward the country everyone wanted to leave. They were dressed in ninja black, but their grumbling and coughing destroyed any pretense of stealth. Between them was a balding crosseyed hound and a mysterious large object wrapped in a nylon parachute. The latter was roughly the size and shape of a grenade launcher and would certainly have led to the old boys’ being shot on sight if they were discovered. Smuggling weapons of war was not a wise pastime for men in their seventies.

“Did they not teach you to row?” asked Dr. Siri, the stockier of the two.

“I was a politician,” Comrade Civilai replied. “They only taught us how to bail.”

“Then that explains why we’re going around in circles,” said Siri.

The river ran high and fast at the end of the rains, and the current would have taken them far beyond Vientiane if they didn’t lean into it with some enthusiasm. But paddling always appeared easier than it was, especially with a heavy cargo. From somewhere to the north they heard the crack of a river guard’s rifle but no accompanying scream. Neither the rifles nor the men who bore them had any accuracy. The old boys were not intimidated by the sound because they knew how little chance there was of being hit.

“And going around in circles would aptly describe the direction of our policies these past five years,” said Civilai, mostly to himself.

“Save your breath for a final push,” said Siri. “There’s our signal. We don’t want to overshoot.”

From the dense foliage ahead, two lights—one white, one red—flashed intermittently.

“Then rest your organs and put your back into it.”

All at once they seemed to be surfing the current rather than fighting it. They gathered speed, charging toward the lights. Remarkably, they had timed their trajectory perfectly but not their velocity. Theirs was not a dignified landing. Ugly the dog, sensing danger, abandoned the vessel five meters from the bank and swam home. The corner of the raft snagged in a tree root so the vessel spun around and hit the bank at speed and in reverse. Dr. Siri was thrown to the deck. There was a loud thump when his head hit the bamboo, but his was a hard head. Civilai wasn’t so lucky. He was jettisoned head first into the river mud where he sank immediately until only his legs were visible. To his credit he did not kick or wave them pathetically. They merely jutted heavenward like a victory sign. He was rescued by the reception committee.

Mr. Geung and Madam Daeng took a leg each and yanked him out of the mire. He emerged with a slurping sound like a large snail being pulled reluctantly from its shell.

“Well that all worked out quite well,” said Siri.

The next day, Chief Inspector Phosy arrived at Madam Daeng’s noodle shop shortly after the morning rush. There were never enough stools to accommodate all the customers who traveled out of their way to eat the best homemade feu noodles in the country. Madam Daeng, never satisfied with shop-bought noodles, had taken to making her own beneath a corrugated tin roof behind the shop. Yet despite all the personal touches and time and effort the woman put into her dishes, and in the face of much criticism from her husband, she refused to increase the prices.

Even the drivers of the black Zil limousines used by the senior Party members had to wait their turn to be served. Their bosses thought they might add a few extra kip as an incentive to jump the queue, but Madam Daeng would have nothing of it. Comrade Civilai often said that hers was the only example of functioning Communism in the republic. She replied that there was nothing political about it. She was just being fair.

“Is he in?” the chief inspector asked.

Madam Daeng saw a familiar scowl on his good-looking face. Since his promotion to chief inspector two months earlier, Phosy had discovered a lot to scowl about. Many members of the central committee considered him too young at forty-six to have been handed such responsibility. But Madam Daeng, twenty years his senior, knew there was nobody more qualified or able to take on the role. She left Mr. Geung to clean the noodle tubs and walked slowly over to the policeman.

Madam Daeng had been a freedom fighter in the clandestine war against the French imperialists, and she was well aware that she still intimidated even the most confident of men. In fact, her short shock of snow white hair and her piercing hazelnut-colored eyes gave her even more of an advantage. Phosy stood no chance.

“I’m sorry, Daeng,” he said. “It just seems that your husband is intent on making my impossible job even more impossible.”

She poured the policeman a glass of iced tea and they sat at a table overlooking the river.

He sighed. “You know very well,” he said.

“What kind of policeman would assume a wife knew every move her husband made?”

“One who knew she was an accomplice in a criminal act?”

They drank their sweet tea and watched Ugly the dog at the river’s edge catching crabs.

“You need to work on that inscrutability, Daeng. Not convincing at all.”

“And what particular crime am I accused of accomplicing?”

“Oh, Phosy. Smuggling? Really? Twenty years ago that would have been called foraging. Nothing to eat in the village so you head off into the jungle and return with enough game to feed the family. Laos is being slowly starved to death by the Thai embargos, so it’s only natural her inhabitants would forage.”

“Foraging across a national border is called smuggling,” said Phosy. “And if Siri had merely been paddling back from Si Chiang Mai with beans and roast pig I wouldn’t be here.”

“Then why are you here?”

“We have an eye-witness account of Dr. Siri and Comrade Civilai importing weapons.”

She chuckled. “And what witness would that eye belong to?” she asked.

“Of course you are. Until they get around to finishing the constitution we won’t have any laws to speak of. Your liberty to say is arbitrary.”

Phosy sipped his tea and followed the progress of a cloud. “A river guard,” he said at last.

“Then why didn’t he shoot him?”

“Why didn’t the river guard shoot Dr. Siri and his accomplices and be done with it?”

“Would it be because the river guards have splendid weapons produced in the Soviet Union but that for the past three months, due to some blip in the paperwork, none of them has been issued with ammunition? That in the event of seeing a suspicious craft on the river, our guards have been instructed to set dry bamboo tubes alight because that explosion makes a similar sound to the firing of a rifle and it may just discourage smugglers? The guards do however have marvelous flashlights and permission to shine the beam on suspicious objects. None so far has been silly enough to do such a thing. Thai smugglers are invariably armed and it would be suicidal. Therefore, no river guard on a cloudy night would have the faintest idea what Dr. Siri—if he even were to be on the river—might or might not be smuggling.”

Phosy put down his glass. “He recognized all of you,” he said. “He even identified the dog. He was in a tree not far from your reception committee. He’s a regular customer here.”

“Then he should be ashamed of himself,” said Daeng.

“We often go for a little paddle and a frolic of a night when it’s too hot to sleep. Mistaken identity, no doubt. I’ll have a word with him. What’s his name?”

“There. That’s the first thing the old Inspector Phosy would have asked. This new chief inspector’s already tangled up in words.”

“And if I had asked that question sooner I wouldn’t have learned what classified information you have regarding our river guards, would I?” 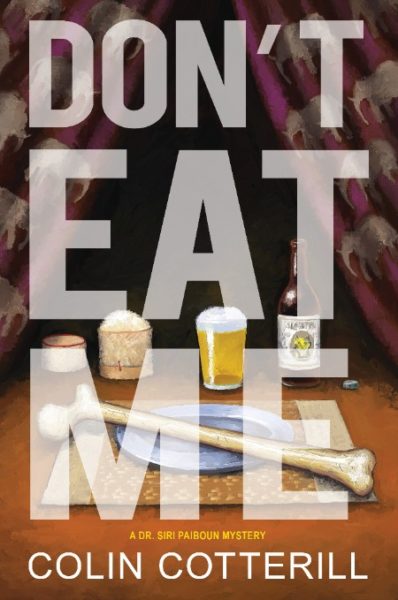