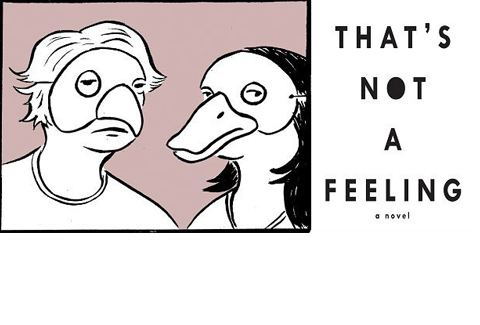 On October 2, 2012 Dan Josefson‘s debut novel That’s Not a Feeling will be on store shelves in all its beautiful paperback glory (Look right. See?).

David Foster Wallace called it “A bold, funny, mordant, and deeply intelligent debut,” and Tom Bissell says,”If That’s Not a Feeling were a fifth novel, it would be a triumph. As a first novel, it is an astonishment.”

We’ve never encountered a book that’s taken such an amazing path to publication–a story you’ll be hearing a lot more of in the next couple of months–or won more fans around the office so immediately after its discovery.

Dan (Full Soho office nickname: “DJ Jazzy Josefson.” I’m not sure if that’s an office-only nickname, but there it is), put this hilarious book trailer together on his own, and in the world of publishing such efforts are the self-promotional gold we all dream about.