Lisa Brackmann has worked as a motion picture executive and an issues researcher in a presidential campaign. A southern California native, she currently lives in San Diego, California. Her debut novel, Rock Paper Tiger was the critically acclaimed New York Times and USA Today bestseller. 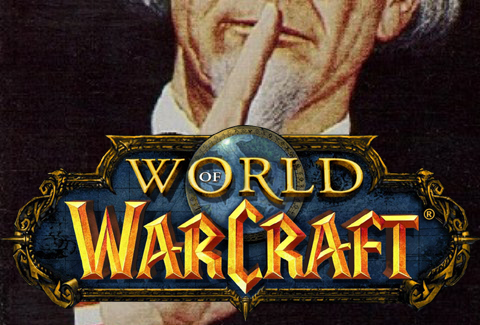 In 2007 I wrote a book called Rock Paper Tiger, a thriller set in contemporary China. One of the plot strands of the book involves an online game that I called “The Sword Of Ill Repute.” It’s pretty much based on World of Warcraft. In the book, a mysterious group of conspirators—Dissidents? Terrorists? Performance artists?—use the online game to communicate. It’s a space where they can speak freely and confidentially, away from the oppressive surveillance of the Chinese government.

My protagonist, a disaffected American named Ellie McEnroe, gets sucked into the world of the online game, forced to play along to find answers to her current dilemma, which is that both American and Chinese intelligence agencies think she knows something that she doesn’t know and are pressuring her for answers. The only thing she knows for sure is that someone is using the Game for purposes that she can’t be sure of. What if they are terrorists? Should she tell her American pursuers? “Hey, look, guys! Terrorist sympathizers hatching their plots through Playstations!”

I was inspired to write this because it seemed like a pretty clever idea. Okay, a little wacky to be sure, but weirdly logical: What a great place to hide a conspiracy, in the middle of magicians and dwarfs and elves going on raids for treasure!

But mainly, I was inspired by visiting Chinese internet bars. Political oppression isn’t the issue uppermost on the majority of Chinese peoples’ minds as far as I can tell. Social oppression, that’s a whole other story. So many Chinese young people feel burdened by the weight of their parents’ expectations, by the pressure of an extremely competitive society, by the sense that their options are prescribed by forces that they can’t effectively push back against.

You go into an internet bar, and it’s mostly young men playing online games. Blowing up shit and cursing up a storm when they get blown up. I learned some awesome profanity when I hung out in an internet bar.

So for me, the whole idea of dissidents using an online game to plot their conspiracies was mainly a metaphor for how online games were a space for Chinese young people to express themselves freely, imaginatively and without censure.

I really did not expect that US intelligence agencies like the NSA and the CIA were actually infiltrating online games to look for terrorists.

Yes, readers, it appears that real-life spies have been playing World of Warcraft on the taxpayer’s dime, fighting orcs and hunting treasure as they snooped for potential terrorists hiding out in Azeroth. According to a 2008 NSA document, online games were a “target-rich communications network” where suspected terrorists could “hide in plain sight.”

Was the time and money worth it? All this NSA gaming doesn’t seem to have produced much in the way of actionable intelligence. But maybe a few spies managed to boost their Dwarves and Blood Elves above Level 70.