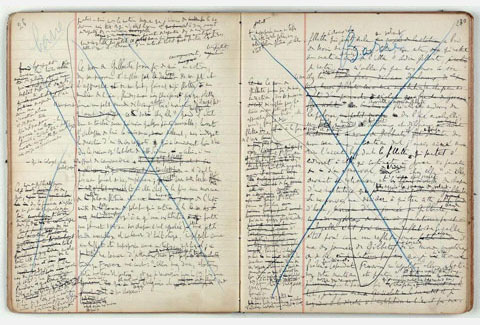 As many people have said, writing a book is like having a child. You give birth to it, nurture it through its infancy, nurse it when it’s sick. You pour yourself into it without robbing it of its individuality. You let it delight you. You let it break your heart. You give it every single thing you have, and then you go find something more to give it.

My best advice to you is, don’t kick that kid out until you’re sure it’s ready.

There it is, your book. A nice, thick stack of pages, filled with the creations of your imagination. A whole world brought out of nothing and made real in the form of a ten-mile sentence. You should be genuinely, deeply, proud of yourself.

And then you should put it away.

Put it in a box. Stick the box in a drawer, where you can’t see it. Put it on the shelf you use for stuff you only need twice a year. Leave it there, and take a vacation. Learn to draw, go camping, get pierced, research the knotted-string writing of the Incas. Go to coffee-houses and write descriptions of the faces you see. Jot down the things people say and work them into scenes, just for practice. Look at someone at the next table and invent a history for her. Write three pages every morning, as Julia Cameron suggests in The Vein of Gold, about anything and everything. Or use those pages to focus on your childhood, the shapes of hands, how to describe a smell. Come up with all the possible synonyms for “said” and put them on a list of words you don’t want to use.

Make notes for your next project.

In your drawer or on that shelf, your manuscript is quietly cooling. Fat is congealing and rising to the surface. Dead dialog is beginning to smell bad. Imaginary blanks are appearing to indicate missing chunks of story. The great idea you forgot to write is gathering its strength so it can spring out at you when you open the box.

After a few weeks, open the box.

We write in heat, but there comes a time when we need to read coldly. This is it. Read with a pencil in your hand, preferably a red one. Be merciless. Circle or underline everything that doesn’t work. If you know how to make it work, put a note in the margin, then and there. If whole scenes or sequences are flat, draw a line down the page next to the type. If you realize you left something out, note it in the margin, where you should have put it in the first place.

Then go through that manuscript and fix everything. Don’t get bogged down; if you can’t make one fix, move to the next, and keep moving. Eventually, come back to the thing you couldn’t fix and give it another go. When you’re finished, print the whole thing out, all over again.

Then take a deep breath, steady your shaking hands, and give it so somebody to read.

When that person tells you what he or she thinks, listen. No matter how hard it is, listen.

A book that’s been accepted for publication goes to an editor, whose job it is to suggest ways the writer can improve the book. This usually takes weeks, while the writer (let’s say it’s me) twists helplessly in the wind. Then, one day, a letter arrives from the editor. Even before I open it, my fingers register that it’s too thick. Then I open it and get the bad news.

I have been edited by some of the best in the business. My current editor works with a number of America’s best, and best-selling, writers. She’s an intelligent, sympathetic, amusing human being whose judgment I trust completely.

But here’s this letter. And my first reaction, even before I read it is, She didn’t love the book.

Well, it’s not her job to love the book. Just as it’s not the responsibility of the person to whom you entrust your manuscript to tell you how wonderful it is, if it isn’t. In both cases, that person’s job is to try to help you.

And it’s your job to listen. Your first reaction may be depression, a sense of rejection, the belief that the reader didn’t understand your work. You will almost certainly get defensive: What do you mean, my baby is ugly? You might want to go to bed. For three or four days.

Well, get over it. If they don’t like pieces of the book, maybe you didn’t write them well enough. If they don’t seem to understand something, maybe you weren’t clear enough. Remember, it doesn’t matter if you can visualize something in your head, right down to the last rich, fulfilling detail. All the reader sees is what’s on the page.

If someone criticizes your work and it throws you into a tailspin, here are a couple of things you might try to remember.

Writing is tough work but it comes from a fragile place. When you think about it, that explains two things. It explains why you bleed so easily when somebody doesn’t like something. But it also explains how you wrote all the things the reader does like—you wrote them because you were tough enough, brave enough, and disciplined enough to get that stuff on the page. And you still have those qualities. They’re available to you for rewrite.

Nobody can see all of anything. It’s like the Buddha’s parable of the blind men and the elephant—each man felt a different part of the elephant, and each man described the elephant differently. Your reader, whether it’s a friend or a professional editor, is not inside your manuscript, the way you are. He or she is seeing the elephant from a different perspective. By the way, in the story as the Buddha told it, the blind men began to argue over whose description of the elephant was the true one, and eventually got into a fight. The Buddha’s points were that people see things differently and incompletely, and that an egotistical or defensive attachment to the way we see things can blind us to the truth of another point of view. If I really need to drive this point home, here it is: suspend your certainty that you’re right, and use what is suggested as a new way to look at, and improve, your work. Build a better elephant.

By the way, I have never had an edit that didn’t make the book stronger. I’ve had two edits where the editor’s perspective was so different than mine that the letter literally didn’t make sense to me. I couldn’t see what the editor was driving at. Ultimately, I just made the suggested corrections by rote, one at a time, without worrying about the fact that they seemed to be taking me in the direction of an anteater rather than an elephant. I just kept making changes, and—in both cases—a penny the size of a manhole cover suddenly dropped, and I saw the editor’s elephant. And in some ways, it was better than my elephant. One of these edits was so profoundly inspired that I believe it turned a book into a novel.

So listen to the advice, get your ego out of the way, and try to follow the suggestions. See what happens. You’ll probably wind up much happier with your book.

Now you need to take the final steps, especially if you’re hoping to publish it. Proof read it. Proof read it again. Proof read it again. If you’re not very good at proof reading, or if you’re a terrible speller, or if apostrophes are one of the universe’s most impenetrable mysteries, find someone who understands all that stuff and pay him or her to proof for you. (Ask the proof reader to make sure that “it” modifies the noun that preceded it (or at least the most important noun that preceded it, and that verbs and subjects are in agreement, and that he or she always knows who is talking.) Incorporate those changes, give the book a last read, and print the whole thing out again—double-spaced, in 12-point type such as Times Roman, Helvetica, or Garamond, and number the pages. Margins should be an inch on either side and an inch at top and bottom.

Then send that baby off.

If you’ve never been published before, be sure to read next week’s piece, called “About Publishing.”

Ed. note: This is the twenty-eighth post in a series. Check out the Table of Contents to see what’s in store, and be sure to come back next week for a new installment.