Read an Excerpt: Rabbits for Food 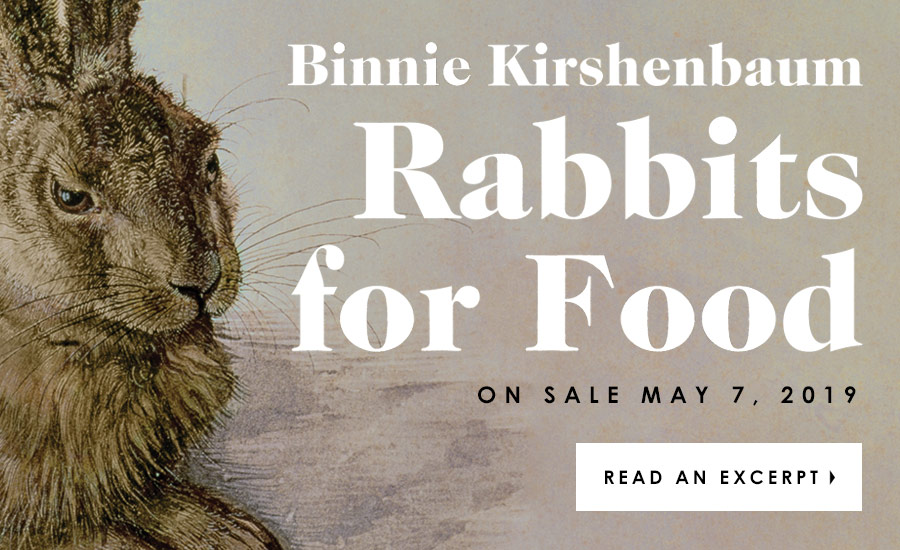 Kirshenbaum is a master of razor-edged literary humor and Rabbits for Food is a devastating, laugh-out-loud funny story of a writer’s slide into depression and institutionalization.

The story begins on New Year’s Eve, the holiday of forced fellowship, mandatory fun, and paper hats. While dining out with her husband and their friends, Kirshenbaum’s protagonist—an acerbic, mordantly witty, and clinically depressed writer—fully unravels. Her breakdown lands her in the psych ward of a prestigious New York hospital where she refuses all modes of recommended treatment. Instead, she passes the time chronicling the lives of her fellow “lunatics” and writing a novel about how she got to this place. Her story is a hilarious and harrowing deep dive into the disordered mind of a woman who sees the world all too clearly.

Propelled by stand-up comic timing and rife with pinpoint insights, Kirshenbaum examines what it means to be unloved and loved, to succeed and fail, to be at once impervious and raw. Rabbits for Food shows how art can lead us out of—or into—the depths of disconsolate loneliness and piercing grief. A bravura literary performance from one of our most witty and indispensable writers.

Binnie Kirshenbaum is the author of the story collection History on a Personal Note and six novels, including On Mermaid Avenue, Hester among the Ruins, An Almost Perfect Moment, and The Scenic Route. Her novels have been chosen as Notable Books of the Year by The Chicago Tribune, NPR, TIME, the San Francisco Chronicle, and The Washington Post. Her work has been translated into seven languages.

“Binnie Kirshenbaum has hit her considerable stride in Rabbits for Food. This novel is compulsive reading; it’s wonderfully paced, explosively funny and witty, and very, very wise about many grave things—but mostly about merely being human.” –Richard Ford

Waiting for the Dog

The dog is late, and I’m wearing pajamas made from the same material as Handi Wipes, which is reason enough for me to wish I were dead. I’m expecting this dog to be a beagle, a beagle dressed in an orange dayglow vest the same as the orange dayglow vests worn by suitcase-sniffing beagles at the airport. To expect that the do-gooder dog will be the same breed of dog wearing the same outfit worn by narco-dogs no doubt reveals the limitations of my imagination.

On the opposite wall from where I sit is the Schedule of Activities board. The board is white, and the Activities are written in black marker across a seven-day grid. Seven days, just in case I want to plan ahead, map out my week. Next to the board is the clock, one of those schoolroom-type clocks, which moves time as if through sludge. That’s it. There’s nothing else to look at other than the blue slipper-socks on my feet. Shoes with laces are Not Allowed. Other shoes Not Allowed are shoes with high heels or even kitten heels, as if a kitten heel could do damage, which is why I’m wearing the blue slipper-socks. Slipper-socks with rubber chevrons on the soles. Chevrons are V-shaped, but the V is upside-down. The slipper-socks also come in dung-colored brown.

It doesn’t take long to grow bored by my slipper-socks, and I turn my attention back to the clock. The second hand stutters, ffffffifty-one, ffffffifty-two. A watched pot never boils. My mother used to say that, that a watched pot never boils. Also, every cloud has a silver lining, tomorrow is another day, and time heals all wounds. Words of comfort that invariably resulted in a spontaneous combustion of rabid adolescent rage. One of the nurses, the tall one, tall and skinny, gangly not graceful—Ella, her name is Ella—walks by, and then as if she’d forgotten something, she pauses, pivots and retraces her steps. “Mind if I join you?” she asks. To sit on the bench, Ella has to fold herself as if her arms and legs were laundry.

In stark contrast to the rest of her, Ella’s head is round like a ball; bigger than a baseball and smaller than a basketball, but that’s the shape. Exactly like a ball. She’s like a stick figure come to life, having stepped out from that ubiquitous Crayola crayon-on-paper drawing, the one with the three stick figures and a tree and a square house with a triangular roof set like a hat at a jaunty angle. From the upper left-hand corner, a giant yellow sun warms this lopsided two-dimensional world. No doubt it’s some standard developmental thing, that most children draw the same crap picture at the same crap-picture stage of life. Except for the prodigies and the children who are already fucked up. With the fucked-up ones you get a different picture, something along the same lines, but with the house on fire or the stick figures missing their heads. The prodigy, as young as the age of four, will draw a split-level house with gray shingles, and in the foreground, beneath a maple tree in autumn, a dog frolics in a pile of leaves. I know this for a fact because my sister, the older one, Nicole, was a prodigy in art although later she did not live up to her potential, assuming there was potential and her talent was not one of those things kids simply outgrow, the way my younger sister, the third of us three girls, was born with allergies to milk and wool among other things, which she outgrew at puberty.

Ella and I sit here on the bench as if the two of us are in this together, as if we are both waiting for the dog, but then Ella says, “You know what, hon? I don’t think the dog is coming today.” Ella calls everyone “hon.” I’m not special, which is one of the things that about kills me from the hurt of it, that I’m not special.

The dog is supposed to be here. It says so on the Activities Board. Mondays and Thursdays from 10 a.m. to noon: Pet Therapy (Dog).

“He didn’t come on Monday, either,” I say, and the sorrow I experience about the dog not showing up is way out of proportion to the fact of it, but that is why I’m here, isn’t it? Because the sorrow I feel about everything is bigger than the thing itself?

At home, Albie and I have a cat who is almost, but not quite, two years old. A rescue. Literally. A man found him in a brown paper bag in a trash can on Third Avenue and Sixty-First Street. A kitten tossed into the garbage as if a kitten were a banana peel. We named him Jeffrey, and on his first day in his new home, he trailed after me the way a duckling follows its mother, or the way a puppy would’ve trotted at my heels. “I know he looks like a cat,” I said, “but I think he might be a dog.”

The following morning after Albie left for work, I got out of bed, as it was my habit to start my day alone. Here, now, in this place, there is no such thing as alone, which would drive me out of my mind, if I weren’t already out of my mind. Jeffrey raced to follow me to the kitchen where I put fresh food in his dish and clean water in his bowl. Down on one knee alongside him, I gave him a scratch behind the ears and kissed him on the top of his soft little head before getting up to take a shower.

It was only after I’d rinsed the shampoo from my hair, when I opened my eyes, that I found Jeffrey there, at my feet, in the shower, looking up at me as if mildly confused: Why are we getting ourselves wet on purpose? I scooped him up into my arms and turned away from the shower spray to cuddle him, to shelter him from the storm raging at my back. In the telling and re-telling of this episode, I would leave out the last part and let the story be about nothing other than a goofy kitten’s extreme cuteness.

Ella suggests that we give up on the dog for now, that I join some other Activity. “So, what do you think, hon? How about Arts and Crafts?”

On Monday when the dog didn’t show up, I went to Arts and Crafts. But not before spending hours on Dog Gear, scouring for dog toys, because I was sorely missing the dog.

Activities are not exactly mandatory but, as Dr. Fitzgerald made clear from the get-go, the road to mental health is paved with Activities such as Painting with Watercolors, Board Games, Origami, Spirituality, Yoga, or even worse—Sing-along, for example.

“Positive interaction within a group is a strong indication of mental health.” Dr. Fitzgerald could not stress enough the importance of social engagement with the other lunatics.

Even at my mental-healthy best, I’m not one for Activities. Positive interaction within a group has never been much part of my social experience. “It’s not just now,” I tried to explain. “Please,” I said. Please, the please subverted an assertion into a request, as if I were asking a favor, as if I were begging.

I do not want to go to Arts and Crafts again. The Arts and Crafts therapist clearly believes that a troubled mind is a simple mind, that to be clinically depressed is the same thing as to be a congenital idiot. In Arts and Crafts on Monday, we glued mosaic tiles to a square piece of wood to make the exact same whatever-the-fuck-it-was that I made in arts and crafts class in the third grade. Even in the third grade, I knew that this was something only a demented person would want, and sure enough, the obese loon sitting next to me asked if she could have mine. That night after dinner, when Albie came to visit, I told him, “I made something for you in Arts and Crafts, but one of the crazy people stole it.”

As if perhaps there is something she’s overlooked, Ella concentrates on the Activities Board. She has overlooked nothing. She knows what choices remain: Creative Writing or Jigsaw Puzzles.

Granted, I am clinically depressed but I’m not that depressed, so low as to go with Jigsaw Puzzles, and Creative Writing—you’ve got to be kidding me.

Learn more about Rabbits for Food