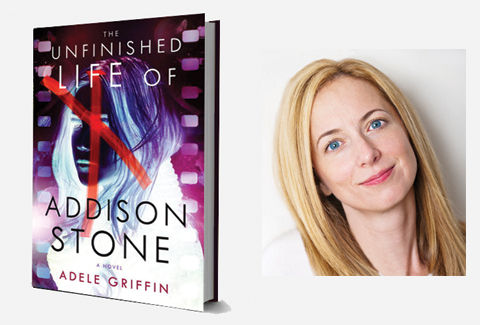 In keeping with the mandate to make blog posts personal, I am feeling the need to share this author-editor interview with Adele Griffin, one my favorite YA authors for the past twenty years, and now to my great fortune and joy, a Soho Teen author. The Unfinished Life of Addison Stone hits shelves on August 12.

The urgency to share comes from a bittersweet (or more accurately a hilarious, outrageous, and weepy) experience I had last night: attending the memorial service of the mother of one of my oldest and dearest friends: Lois Wallace.  Lois was a bigger-than-life literary agent who represented Don DeLillo, Joan Didion, William F. Buckley, Simon Winchester … too many luminaries to count, really. And a big takeaway from the evening was that many of the classic works Lois represented were the direct result of close relationships—of thoughts shared or deals negotiated over drinks or a meal, of conversations with friends that resulted in tangible projects, of ideas willed into reality.  Adele’s book with Soho shares some of that, which makes it even more special for me as an editor.

Daniel Ehrenhaft: I already know the answer to this one (dinner is involved), but I must ask, anyway: What was the genesis of The Unfinished Life of Addison Stone?

Adele Griffin: This has to be one of my favorite genesis stories. The Unfinished Life of Addison Stone is a New York art fable with its own New York publishing “back fable.” You and your lovely wife, Jessica Wollman, came over to our home for a dinner that ended up being one of those go-late, talky nights about every topic from the Edgar Awards to Edgar Winters (true! as you know!). At some point we were discussing our enchantment with books about bands—The Velvet Underground, The Ramones, The Sex Pistols.

You mentioned And I Don’t Want to Live this Life and I mentioned Ciao! Manhattan, the George Plimpton / Jean Stein biography of Edie Sedgwick. I confessed that I’d always wanted to write a modern Edie story, only this time starring a Banksy-type stunt artist. “That’s an amazing idea,” you said. “Do this book now, and with us!” And I agreed—although on Saturday night, I was playing pretty fast and loose with proclamations and cheesecake dessert.

Monday morning, my agent, Charlotte Sheedy, called to tell me there was a contract draft from you in her inbox. That same day, you sent me very encouraging note to take this risk. It was my, “if not now, when?” carpe diem moment. I jumped.

DE: Related, what (or who) were your biggest influences in putting the novel together?

AG: When I was writing Addison, my mind kept holding on two moments; a spring day in 1986 and again in 1996. The ’86 memory was a high school field trip to Soho. I’d never been to Soho before. That day, I ate my first sushi roll, I saw Keith Haring graffiti, and I bought a dress for five dollars from “Antique Boutique” (and wore it out of the store). But mostly I went to gallery spaces and stared and stared at art. I never wanted to go home.

Ten years later, spring of 1996, I was back in Soho, on 65 Bleecker Street, for my first meeting with Charlotte Sheedy, of whom I’d known only as this legendary New York figure. I was so nervous and excited that I had to press paper towels against my palms in the bathroom beforehand.

Both of these moments feel long ago, overlaid in the value of re-remembering. But I kept crawling back into them, to feel that original surge that I’d preserved in amber. Addison Stone is a fantasy, she’s that mythic story about a small town girl who moves to the big city. And I needed every day that Addison lived in New York to be a shot of breathtaking newness. I wanted the reader to feel the adrenalin of each moment, the singular experience of being young in a city and thinking that it might swallow you up, or it might have been invented just for you.

DE: The art feels so authentic, both for its caliber and because the pieces reflect Addison’s growth and struggles through time—so uncannily that it’s eerie.  How did you go about finding such amazing work, and who contributed?

AG: All I knew going into the Addison project was how much I wanted a reader to see an artist with technical skills matched by an ability to use art as a window to her psyche. I ended up using five different artists to tell Addison’s story; from a young undergrad currently enrolled at Pratt Institute, all the way through to the phenomenal portrait work created by Michele Rawlings while she was a graduate student at the Rhode Island School of Design (RISD). The professor at RISD who put me in touch with Rawlings thought that her work was brilliant while it also captured Addison’s raw vulnerability. I did, too—to the point that, after the art came in, I found myself rewriting text to create a deeper synergy between Addison’s mind and the art Rawlings had created.

DE: What was it like working with Giza LaGarce, the model who portrays Addison?

AG: I met Giza through a mutual friend, who brought her to one of my very nerdy “Game of Thrones” parties—where we have grog and stew and watch the show. Giza showed up in braids and a long dress, and was stunningly Thrones-y. I’d been working on a first draft of Addison, and I hadn’t even thought about featuring a visual Addison; the original idea was to showcase the art. Suddenly there was Addison Stone in my kitchen, and she was every bit as ethereal and charismatic as Edie Sedgwick. That’s when I saw an entirely fresh component of the book, as an intimate biography.

Giza herself is all sunshine, so my husband, my assistant, and I were always saying sad things to her during the photo sessions, so that Giza could sink deeper into the spirit of troubled, fragile Addison. It got to be a bit of a joke—how to depress Giza. That noted, Giza’s lovely personality and her thoughtful commitment to this project absolutely sprang Addison to life.

DE:  This might be too deeply personal, but as you’re well aware, editors know no propriety or boundaries.  Did you find yourself reflected in Addison as you worked on this novel?  As a teen, or at any time of your life?

AG: When I read Ciao! Manhattan, I was twelve years old and I’d lived my whole life on Army bases. The glamor and beauty and decadence of that memoir was pure fantasy for me—I didn’t know anybody who knew anybody who might have known any those people. But the life of the mind is so wildly peculiar. As readers, we have such a fascinating capacity to vault into other lives.

I finished Edie’s story shivering because I was so sure that in some way, I had been there, too. I saw myself as friends with Edie and her friends—Andy Warhol, Patti Smith, Lou Reed, and seventh grader me—all hanging out together in the Factory. I want Addison Stone to be that same intensity. I want people to leap into this story as a full immersion experience. That’s what I tried to catch back. That’s the way I love to read.

Read more about The Unfinished Life of Addison Stone here.