Read an Excerpt: Fall of Angels 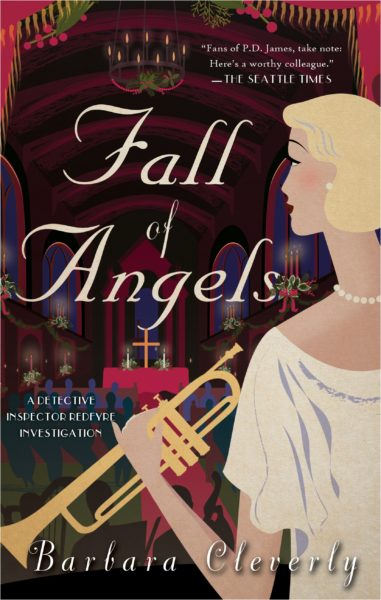 Of Fall of Angels by Barbara Cleverly, which is now available everywhere, Library Journal says:

“Aficionados of Jacqueline Winspear and Dorothy Sayers will relish this atmospheric historical mystery, with its colorful period details that brilliantly capture post–World War I Britain.”

And in the New York Times Book Review:

“Despite her mastery at vivid scene-setting, Cleverly never loses sight of the historical puzzle that is central to her story. Simply put, it’s a stunner.”

England 1923: Detective Inspector John Redfyre is a godsend to the Cambridge CID. The ancient university city is at war with itself: town versus gown, male versus female, press versus the police force and everyone versus the undergraduates. Redfyre, young, handsome and capable, is a survivor of the Great War. Born and raised among the city’s colleges, he has access to the educated élite who run these institutions, a society previously deemed impenetrable by local law enforcement.

When Redfyre’s Aunt Hetty hands him a front-row ticket to the year’s St. Barnabas College Christmas concert, he is looking forward to a right merrie yuletide noyse from a trumpet soloist, accompanied by the organ. He is intrigued to find that the trumpet player is—scandalously—a young woman. And Juno Proudfoot is a beautiful and talented one at that. Such choice of a performer is unacceptable in conservative academic circles.

Redfyre finds himself anxious throughout a performance in which Juno charms and captivates her audience, and his unease proves well founded when she tumbles headlong down a staircase after curtainfall. He finds evidence that someone carefully planned her death. Has her showing provoked a dangerous, vengeful woman-hater to take action?

When more Cambridge women are murdered, Redfyre realizes that some of his dearest friends and his family may become targets, and—equally alarmingly—that the killer might be within his own close circle.