Read an Excerpt: The Incredible True Story of the Making of the Eve of Destruction 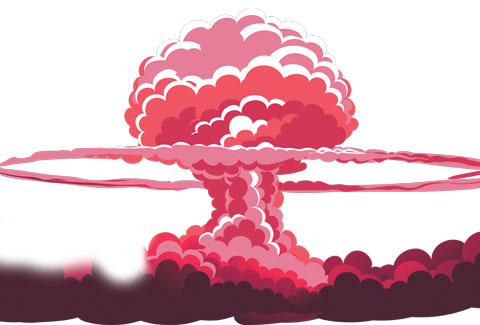 Amy Brashear’s brilliant new page-turner, The Incredible True Story of the Making of the Eve of Destruction, is in stores everywhere.

Critics agree that this stunning YA novel is “as spectacularly written as it is researched … definitely one of the most unique YA novels you’ll read this year.”

To get you ready for such a “clever” and “laugh-out-loud” read, we’re posting an excerpt.

Chapter One is below.

It was one minute to noon, and I was standing in the lunch line at school—it was chicken and noodles day, which meant I’d find a bone, and it would ruin my meal like it always did. The cafeteria was buzzing about that week’s game, Griffin Flat versus Hollow Court. Go, Shiners! The season was a bust—zero to eight, with two games left to play. Seemed pretty damned pointless to be slaving away on a game when your players already knew that the only winning move was not to play. Rah-rah. It was hard to cheer for losers.

I grabbed a carton of milk from the crate, even though chocolate milk and chicken and noodles were a lengthy bathroom situation in the making. Then I reached into my pocket for lunch money borrowed from my stepbrother, who was still getting used to me as his “sister” and not the dorky girl who took over the “man room” down the hall.

Shhhh. The siren across the street from the school blended with the other four in town. Louder, more intense, its wavelike tones mixed with the voices of the cafeteria on that Thursday. No one paid attention. Once a week the town did some kind of siren test just to make sure we were used to ignoring it in case of an actual emergency. Two minutes and the sirens went off, but no one noticed because ever since FEMA implemented the weekly occurrence, it had blended in to our mundane lives.

“Can those sirens shut the hell up?” Kevin Barnes asked, messing with the dial of his boom box.

Kevin was a senior and all-around badass. He sat across the room with the pack-a-dayers, next to a door that led to the trash cans where everyone went for a smoke. I sat across the room next to the pay phones. So when one of them had to make a phone call, we listened in on their conversations. My friend Max had been known to blackmail many of them.

“Thank God,” Kevin yelled once the sirens died down. He turned up the volume on his boom box and tapped his shoe to the beat of “99 Red Balloons”by Nena as he sat on the tabletop. (Ms. Little, the librarian and cafeteria monitor, had told him hundreds of times not to sit where he ate, but he didn’t listen.)

“Everyone, shut the hell up!” Kevin screamed. A man’s voice got louder with each turn of the volume dial.

“Now’s your once-in-a-lifetime chance—all you have to do is be caller nine. Caller nine. That’s it.”

But people actually shut up. We stared at Kevin’s boom box while the radio station went back to playing music—“Every Breath You Take.”

“What’s going on?” I asked Max, but he just shrugged. He was into the comic book that I let him borrow a week ago. At first, I thought everyone was looking at me. But they weren’t. It was the phone bank behind me. I watched them like a science experiment. (I’m into science—don’t hate.)

Background: Everyone was listening to the radio. But the music stopped. Everyone got real quiet.

Objective: To find out why everyone was staring at me.

Limitations: They stared back.

Kathy was sitting across from me. She was tapping her fingers on the tabletop and repeating seven digits. “444-2323.”

All around the cafeteria, legs were being swung over the bench seats. I glanced at the phone booth behind me, then at my classmates running toward me. A mad dash to the phones. I stood up, grabbed a receiver, dug a quarter out of my pocket, and dialed the number. 444-2323.

There was no busy signal.

I was caller number nine.

“Hello. Caller number nine? Are you there? This is DJ Crazy Bob in the morning. Who’s this?”

“Oh, shit on a cracker,” Dana said as my voice echoed in the cafeteria.

“Turn it down. Turn the volume down,” Ms. Little snapped at Kevin.

He turned it down. My voice wasn’t so loud. It also wasn’t how I thought I sounded in my head.

“Congratulations, Laura. You’re the ninth caller, and that means if you correctly answer these three questions, you’ll be the winner of the ultimate star treatment prize package.”

“Yes, you will. You and a guest will get the star treatment on the set of Eve of Destruction. Can you believe it?”

I waited on the line until the song ended and DJ Crazy Bob was back on the air.

“And since the prize is a walk-on role of the film, we’re basing the questions on the Big One—the Big Bomb—okay? Got that?”

“Okay. Laura, a girl of few words, here is question number one. Who is considered to be the father of the atom bomb?”

“Go, Laura, go!!!!” Dana said, clapping her hands and jumping up and down behind me.

“Question number two: A thermonuclear weapon is made up of two isotopes. What are they? Wait, these questions are hard. Who made these up? Laura, why don’t you hold on a sec? Let me talk to someone about this—”

“No, wait—I can answer that,” I said, turning to face my classmates, who were staring at me.

“Really? You can answer that?”

“Um. That’s correct. Are you pulling my chain, Laura? Are you even in high school?”

The room was silent like it was witnessing something magical.

“Well, okay, then. Last question, Laura, and it’s a doozy—well, to me it’s a doozy. To you, it’s probably what happens when you mix the colors blue and yellow together—”

Everyone around me was quiet. Even Dana, and she had never been quiet a day in her life. All eyes were on me. I didn’t want to make a fool of myself. I had to get this question right.

“Last question—since the plot of Eve of Destruction takes place in 1954, and MAD was a product of the United States doctrine during the height of the Cold War, and our current relations with Russia today are, in a word, icy, what does MAD stand for?”

Dana flipped her thumb up and down—a way to ask if I got this, and I nodded and smiled. I had this. “Mutually Assured Destruction. It’s like if we push the button, they’ll push the button, and we’ll all die.”

“Morbid,” Kevin said, crossing his arms over his chest.

“Congratulations, Laura. You’re the winner of the ultimate star treatment prize package. I can’t wait to see you on the big screen. I’m DJ Crazy Bob, and I’ll be back after these words from our sponsors—playing the hits of today and tomorrow—if there is a tomorrow.”

Some lady took my contact information and gave me the spill about how no one in my family could be an employee with the radio station, and if they were, my winning the ultimate star treatment prize package would become null and void.

“You’re going to be a movie star?” Dana said, slowly and in a whisper.

“Have you been living under a rock?” Her eyes practically rolled out of her head as she gave me the lowdown—the 411—as if I didn’t know—on the movie that was set to shoot here, well, near here in two weeks.

Okay, for those reading at home—or literally living under a rock—it started with a rumor, then an announcement, and then finally scouts, a promise, and a movie.

But a major motion picture in the land of (insert lyrics to The Beverly Hillbillies) or at the base of the Ozark Mountains. All the alphabet soup was here. News crews set up shop. They were invited by the governor. Perfect photo op. “Blah blah blah, welcome to Arkansas, blah blah blah. Home of diamonds, Tyson chicken, Walmart, and the Razorbacks, blah blah blah.” The papers and TV ate it up. Governor Clinton—charisma was his middle name.

Now, of course total-destruction-due-to-total-world-war movies had been done before in prime time, but this wasn’t some movie of the week that would make the president twitch with a tinge of guilt over annihilation of the planet; this was actually a good idea. Hell, if the Russians were aiming their weapons at us, we would do the same. We had Star Wars to lean on if things got dicey. (No—I’m not talking about the greatest movie ever made. I have a crush on Han Solo.)

No—this was different. This had movie stars. Real movie stars. Not the TV kind. Owen Douglas, Astrid Ogilvie, Peony Roth, and Freddy White (who was black). Max had a crush on Astrid, but she was British from cheery old England and had an accent that didn’t sound like something like molasses being poured out of a mason jar. She was attached to this year’s megastar who made somewhat of a splash at the MTV Video Music Awards (the same MTV Video Music Awards where Madonna got down with her bad self in a wedding dress), Drake Cooper.

“Nothing says Thanksgiving like death and destruction,” I said.

“Exactly. Are you with your mom and Dennis or your dad this year?”

“Mom and Dennis. Dad’s stuck on base.”

“What about Terrence? Is he going to be there too?”

“It’s still crazy to think that your brother is Terrence Jennings.”

“My mother still says a prayer for your family during Sunday morning services,” Kathy said, blowing her nose with her napkin.

“Well, yeah, that’s why she does it,” Kathy said, stuffing the last bite of chicken and noodles into her mouth. Then she carried her tray over to the cleaning station, leaving Dana and me alone.

“She’s weird but popular, so it cancels out the weird,” Dana said. “But honestly, your family situation is weird.”

My family situation. That was a small word for what it really was—dysfunctional. Messy. Scandalous. We were The Brady Bunch, minus four kids and a maid—and the whiteness.

“Don’t be so ashamed you’re Terrence’s stepsister. His dad had sex with your mom while still married to your dad.”

“Thanks for that recap.”

“Oh, come on. You have a story. It will be awesome in the tabloids. White woman screws black man—”

“Breaks up two families. Screws not just each other but us as well,” I said finishing it for her. 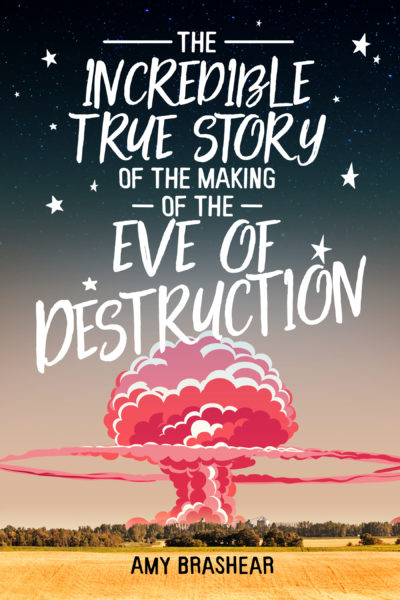