Read an Excerpt: The Summer of Ellen by Agnete Friis 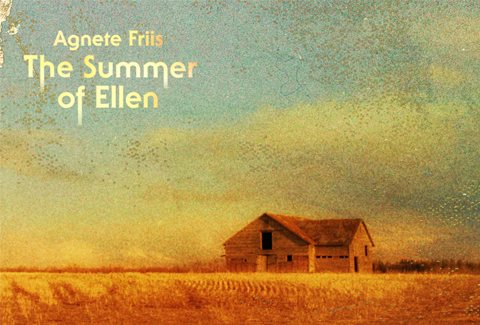 Keep reading for an exclusive excerpt from Agnete Friis’s (The Boy in the Suitcase, What My Body Remembers) new psychological suspense novel set in modern day Copenhagen and rural Denmark in the 1970s, The Summer of Ellen. A tense, dark, carefully rendered story of an architect, Jacob, called back to the farm where he spent the summer of 1978 to help his great uncle discover what happened to a young woman named Ellen who captivated everyone she met, but disappeared amidst tragedy in the rural community.

On sale now wherever books are sold.

There was no light.

The windows on the fifth floor of the soulless new building reflected only the blinking red beacon at the top of the crane on the other side of the canal. Style: dystopian modernism. Exterior: windswept green trash cans and an intercom, its text in yellow scrolling across the display like a news ticker in the main square.
The rust from the balconies’ iron skeletons had already dripped down the newly plastered walls. Their concrete plateaus and cornices were just like the red-assed baboons’ enclosure at the Copenhagen Zoo. I knew every single imaginative architectural detail. An old college buddy had once worn black jeans and smokedhash with squatters there in the youth center—later to become a totalitarian asshole who built houses that belonged in the old Soviet Union. I hated that structure, and I hated the fact that I was standing here again. Hands buried deep in my pockets, I stared at her bedroom window, whose open blinds revealed a painfully ordinary weeping fig in the daytime. She was probably already lying in bed, breathing sweetly, comforter thrown aside because of the heat.

I took out my phone and listened to my messages. There were a couple from the bank. An officious and possibly hyperactive young man whom Kirsten had asked to look at our finances and who wanted to meet us. All the time. The next message was only a muted whisper, then the sound of a man clearing his throat and muttering something incomprehensible before hanging up.

I could call her, of course. Or write. But there wasn’t much more to say. I settled for going over to the front door and studying the names listed on the intercom for now. Stig and Janne Nielsen. Her surname was so ordinary compared to her, but it had its own charm, too. Something unusual, hidden from everyone other than me.

I shouldn’t have come here, but my brain ignored those kind of rational conclusions as it conspired with my gut. This had resulted in a bottle of wine before leaving, drunk directly from the bottle while I waited for darkness to fall and the noise in the street to become cheering shouts and breaking glass. Then two beers, followed by a careful descent to street level, Nørrebro Station, an S-train and the Metro through the city’s twinkling lights. Young people were making their way into the city, enveloped in eau de cologne and alcohol, but nobody took any notice of me as I sat there, leaning against the window with the world flickering pleasantly by in my skull. I alighted at the Bella Center, just as I was used to, and walked the rest of the way along the water.

I swayed slightly as I leaned into the yellow display. Rang and regretted it, even before I’d done it. Could hear the routine beep ringing through the system and stood there like an idiot, frozen in place, waiting for the inevitable.

“Yes?”
Her voice in the loudspeaker was dark and distorted, and I knew she was standing up there in the semidarkness, naked or wearing only a T-shirt, her short hair tousled after sex or sleep or something in between.

I didn’t answer. Struggled to tear myself away and finally got my not-quite-stable legs started. I was horribly visible in the yellow light of the street lamps, and a window opened up there and a man leaned out of the window.

“Get away from here! I mean it. Next time, I’ll call the police.”
Something hit the asphalt with a hollow thud, splintering into a thousand pieces, and I increased my pace to a half run and tripped, my hands landing in something soft that smelled like shit. I wiped my hands on my new too-tight jeans. Vanity is truly a sin that brings its own punishment.

I woke up sweating booze, glued to the plastic-wrapped box mattress from IKEA that I’d thrown onto the floor of my new bedroom. I’d apparently been clever enough to fling my clothes elsewhere in the apartment during the night, and the window was open a crack to let in the blinding sunshine.

I walked out to the kitchen and opened the empty fridge while I tried to decide if there was anything I actually needed. Food, sleep, sex. It was alarmingly quiet in my needs center. No requests besides the hair of the dog, a beer I pulled from a sixpack with trembling hands. Back in the living room, I flicked through some of the LPs in one of my cardboard moving boxes. I could buy a new record player and a pair of half-decent speakers, drink beer and listen to the Police. After all, I wasn’t a student anymore, but a middle-aged man with money and a pension.

I took a sip of my beer, glaring at a dusty cobweb hanging down from the ceiling. From dust you came, and as dust you will forget your time in a three-bedroom house in Nørrebro.

I’d lived here before, in Nørrebro. First alone, then with Kirsten. Not in this apartment, but in one that resembled it with all its big-city shabbiness. A bunch of students had moved out of this apartment just a few days ago, leaving the finish on the bright parquet flooring chipped in places. Burns from discarded cigarettes stained the floor where the sofa had stood, and in the corner was a square, sticky discoloration, probably the impression of an unread textbook left marinating in dark rum. It was scorching hot in the apartment, which had been constructed in a time before the oil crisis and mineral wool insulation, with a massive south-facing window. I could hear kids shouting down in the courtyard. Arabic, Kurdish and Danish street slang. “Fuck you, n—,” and “I’ll fuck you in the ass.”

Down by the dumpsters, the very same youngsters had stamped the intestines out of a rat and left it lying in the sun. The flesh was already black and curling at the edges. A litter of grayish fetuses the size of my little fingernail had been pulled out of its womb and lay across the asphalt like shiny beads on a string.

The physical move had been manageable: two boxes of LPs from the ’80s—Bowie, Depeche Mode, the Police, U2—the four kitchen chairs, a few boxes of clothes and shoes and toiletries and the living room bookshelf. I’d chosen to leave almost everything with Kirsten. Not because I thought I owed her anything, but because I liked the idea of keeping the house intact. To preserve the memories, if nothing else. The kids’ childhood home and all that. Kirsten had laughed aloud when I’d said it .

“I’m not the custodian of your relationship mausoleum,” she said. “And I won’t be embalming the dining room or marriage bed, either.”

“Not even the cat?” I asked, and she shook her head. Was suddenly serious.

“I’m not Madame fucking Butterfly, Jacob. Nothing’s going to stay the same. Not the house, and certainly not me. Just so you know.”

Her smile faded. Stupid of me, of course. Insensitive. But I knew so little about the rules of divorce. How were you supposed to do it? And hadn’t there always been something off between us? A grating sensation, like sand in your shoe. The first time I met her was on a sparkling, frosty cold morning at the lakes, where she was sitting on a bench blowing white clouds of steam into her red hands. I sat next to her and said something like “beautiful morning,” after which she looked me directly in the eye and smiled weakly.

“And what about me?” she asked.

I could see she’d been crying and assumed it was heartbreak weighing heavily on her. When you’re in your early twenties,
you don’t know many other kinds of sorrow.

“Very beautiful,” I said, realizing how easy it was to lie to her. That it might actually be what she preferred. There was so much that surprised me back then.

“So no tragic arias in my absence?”

“I’ll try to minimize them for the cat’s sake—and the neighbors’,” she said. And although she was smiling again, there was a bone-shattering coldness to her voice. “Don’t worry. I’ll be fine.”

The phone rang and I let it ring. Then it started again. I rolled onto my back, holding it up in front of me, my arm outstretched. I’d become farsighted, on top of my usual nearsightedness. Everything was either too close or too far away. An eternal imprecision and a problem that, according to my optician, couldn’t be fixed. I squinted, looking at the screen. Didn’t recognize the number, even though it felt like I did. The phone rang out again with renewed effort, and I suddenly knew why the number seemed familiar. A landline number from Djursland, the middle four digits the same as our own from decades ago.

I answered the phone and heard a short-of-breath wheeze.

“Hello?” I spoke louder than I’d meant to, having involuntarily thought of aging and death.

Then something happened. A sense of calm on the other end. The rattling noise disappeared. The breathing was still heavy, but more regular now.

I nodded, cleared my throat as a piece of the past resurfaced with unexpected clarity. The sky, first orange and deep rose pink and afterward black, a black August night. The fermented sweet smell of straw, wet clover and earth from freshly harvested fields. Myself and Anton sweating over the coupling of the tractor and trailer, with the sky above us threatening to burst. Followed immediately by the sensation of sinking into a darkness I couldn’t fight my way out of.

“Of course I remember you, Anton.”
A long pause, tired breathing. A vacuum cleaner switched on somewhere in the background.

I hesitated. It had been almost forty years since I’d last seen Anton, so he must be quite old. His needs would be best attended to by a nurse.

There was a deep, trembling sigh at the other end, followed by a series of wet, violent gasps.

He didn’t answer. The vacuum cleaner behind him was turned off, and the only thing I could hear through the receiver
was soft sobbing.

“Anton, I—is anyone there with you? Are you sick?”

A deep breath. I could hear him collecting himself, or at least trying to.

I knew what he wanted. Maybe I’d already known it the second I’d heard his voice.

“I have to find her. Anders is asking for her.” A glimpse of dark hair, fluttering in the summer wind, and an almost deranged yearning to touch it. 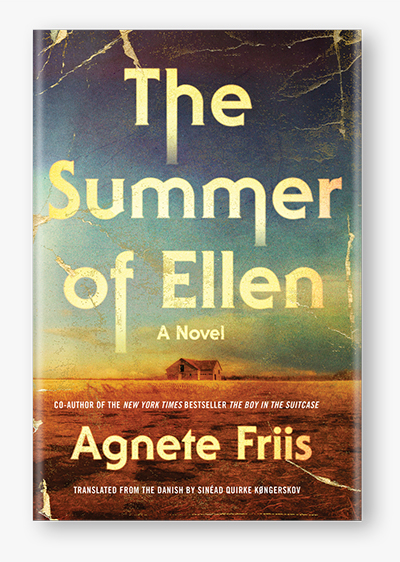