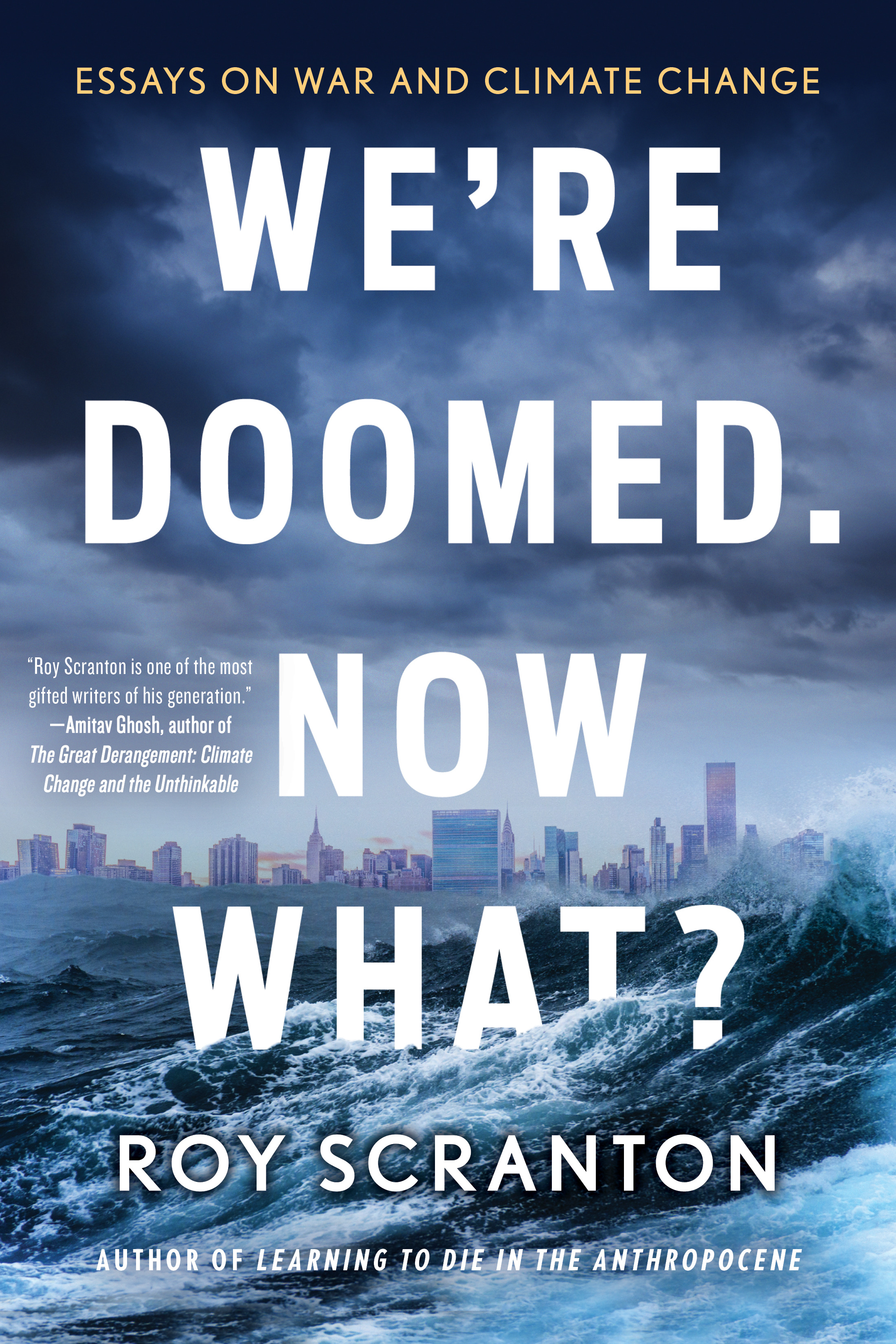 “Taken together, these essays—dark, often beautiful, frequently scholarly, always gripping—seek to accurately describe things we might prefer not be described. The work is difficult, noble in intention, and brilliant in execution.”

And from the Pulitzer Prize-winning author Elizabeth Kolbert:

“Roy Scranton draws on his experiences in Iraq to confront the grim realities of climate change. The result is a fierce and provocative book.”

The time we’ve been thrown into is one of alarming and bewildering change–the breakup of the post-1945 global order, a multispecies mass extinction, and the beginning of the end of civilization as we know it. Not one of us is innocent, not one of us is safe. Now what?

We’re Doomed, Now What?addresses the crisis that is our time through a series of brilliant, moving, and original essays on climate change, war, literature, and loss, from one of the most provocative and iconoclastic minds of his generation. Whether writing about sailing through the melting Arctic, preparing for Houston’s next big storm, watching Star Wars, or going back to the streets of Baghdad he once patrolled as a soldier, Roy Scranton handles his subjects with the same electric, philosophical, demotic touch that he brought to his ground-breaking New York Times essay, “Learning How to Die in the Anthropocene.”

From the essay “What Is Thinking Good For?”:

Spend a couple of hours online skimming think pieces and hot takes, bouncing from Slate to the New York Times to Twitter to The Chronicle of Higher Education to Reddit, and you’ll soon find yourself either nauseated by the vertigo that comes from drifting awash in endless waves of repetitive, clickbaity, amnesiac drek, or so benumbed and bedazzled by the sheer volume of ersatz cognition on display that you wind up giving in to the flow and welcoming your own stupefaction as a kind of relief.

Nevertheless, one can, out there among the hired trolls, scum-slingers, professional identitarians, pundits, and charlatans, still reliably find good work: courageous investigative journalism; thoughtful, witty, and erudite reflections on complex cultural phenomena; heartfelt, perceptive essays exploring intricate ethical and social dilemmas, each piece the assiduously hewn product of countless hours of labor. And all of it eminently disposable, fated to be consumed and retweeted and referred to for a few hours then for-gotten, like everything else passing through the self-devouring gullet of the ouroborosian media Leviathan we live within, picked up and dropped as we keep searching for newer confirmations of our half-articulated hopes and fears, more recent pictures to prove to us our world makes sense, fresher flags to wave telling other people who we are and that we exist. The internet’s total instrumentalization of thought, in which every shared #mustread is repurposed to accessorize an online persona, has created a constant demand for new content, a great vortex sucking every half-formed attitude and clever tweak into its gaping maw, which is also its anus, spewing and eating and spewing again in an interminable grotesque mockery of public intellectual life, Hegel’s world spirit as human centipede.