The Story Behind: F.H. Batacan’s Smaller and Smaller Circles

Rudy Martinez is the Senior Marketing Manager of Soho Press. 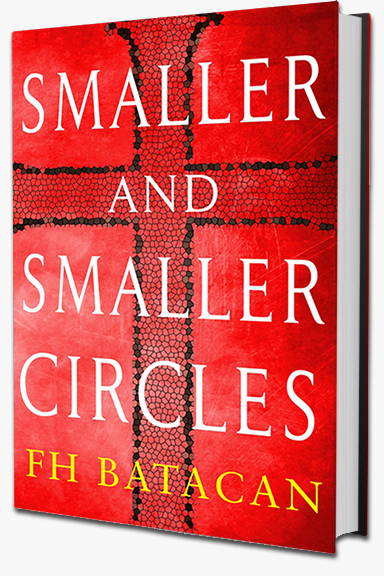 “You’ve been watching too many foreign movies, Father Saenz; there are no serial killers in the Philippines.”

When F.H. Batacan first published Smaller and Smaller Circles—now acknowledged as the Philippines’ first crime novel—she was calling for a revolution. Or maybe two.

Early in Batacan’s prizewinning novel, the hero-sleuth, Jesuit priest and forensic anthropologist Father Gus Saenz, reveals his personal dream of overturning the popular national myth that there are no serial killers in the Philippines. A quick Google search will reveal hundreds of hits that try to support this mind-boggling myth, offering ersatz logic that ranges from the fact that Filipinos are more family-oriented than other cultures and therefor don’t have the alone-time necessary to commit murders to the simple fact that none are found or prosecuted. Smaller and Smaller Circles flies in the face of this dangerous myth, forcing the eye to the millions of disenfranchised poor for whom law enforcement has no resources or incentive to protect, and who have no one to seek justice on their behalf. Batacan’s novel asks for the acknowledgment of the failures of the country’s infrastructure—and for a solution to follow this acknowledgment. The novel stirred controversy and discussion from its first publication, and continues to do so today.

F.H. Batacan also started a literary revolution by producing what is now widely acknowledged as the first Filipino crime novel. In the decade that has passed since its publication, others have begun to follow suit, and now the genre is burgeoning.

Smaller and Smaller Circles was first published as a 35,000-word manuscript in September 2002 in the Philippines to a storm of critical acclaim. It had already won the 1999 Carlos Palanca Memorial Award for best English-language novel (the award popularly known as the “Philippine Pulitzer”), and it would go on to win the Madrigal-Gonzalez Best First Book Award in 2002 and the Manila Critics’ Circle National Book Award for Fiction in 2003.

In the autumn of 2012, the University of the Philippines Press’s ten-year publication license for Smaller and Smaller Circles was expiring. At the same time, Soho Press Associate Publisher Juliet Grames was invited to the Manila International Literary Festival, where she picked up a copy of the book at the National Book Store. “The novel was rich with setting atmosphere and heroism, and simultaneously darkly noir and glimmering with faith in the better aspects of human nature,” Grames says. “I knew the format was not quite what the global crime fiction audience expects in a novel—it was rather short—so I approached Ichi to see if she would be willing to tell more of the priests’ story. As it turned out, she had already considered such a story expansion, and immediately got to work on what would become the finished manuscript of the Soho edition.”

The complete Soho edition—on sale August 18, 2015—is a work that equals or even surpasses the literary quality of the original, but also yields an extremely satisfying read to the crime fiction enthusiast and a fascinating glimpse at the forerunner of a burgeoning new source of mystery.