This story is fiction.

But it also tells the truth.

All stories start with a seed and for me that seed was planted years ago when I first crossed paths with Lord Byron’s epic poem, The Giaour, along with his deeply ingrained Orientalism and sexism. In college, I took a class that centered around Mary Shelley’s Frankenstein, a novel that I found threaded with the Orientalist stereotypes of the time. Yes, even our favorite iconoclastic feminists held entrenched prejudices—mostly toward women of color. (See: Vindication of the Rights of Woman by Shelley’s mom, Mary Wollstonecraft, where she imagines Muslim women as servile and soulless, unthinking sexual curiosities.) My seemingly fated meeting with the Romantics led me to my bachelor’s thesis, which examined Napoleon’s influence on British Orientalism—a corporate and literary institution that allowed the West to create, restructure, and appropriate the East in accordance with its colonial endeavors. Through my research I realized that the Orientalism of 18th and 19th century conquest was still very much present and flourishing in our world today. Control the narrative, control the people. Sound familiar?

I wanted to write a story that would bring those connections to light. I wanted to create a character, a girl like all the other girls finding their voices, a young woman who could reach back into the past to seize a stolen narrative and reclaim it—as a woman, as a Muslim, as a human being fighting for a space of her own. That character is Khayyam and the voice she freed is Leila’s. Two young women connected through time both giving utterance to a powerful idea: they are the heroes of their own stories.

The Giaour, published in 1813, is a fragmentary poem of 1300 lines with three different narrators and points of view telling the story of a young woman, Leila—of her life in a Pasha’s harem and her affair with the Giaour, an alleged infidel, her drowning in a sack death when her betrayal was discovered, and a fight to the death between the Pasha and the Giaour. It is a story about a woman, in which the woman has no voice. It is the story of the East told completely through the lens of the colonizer. It is the story of a Muslim, written by an Orientalist who fetishized the harem and who was convinced Muslim women had neither the power nor desire to speak for themselves.

While the Leila in Byron’s The Giaour is fiction, some scholars suggest she was “inspired” by a sixteen-year-old girl that Napoleon took into his own colonial harem during his ill-fated attempted conquest of Egypt. When he abandoned her (along with his entire army) as he escaped back to France, she was killed by local authorities for her alleged collaboration with Napoleon—bound in a sack and drowned. The tragedy of this sack death that Byron seized upon for his poem eventually led to a series of paintings and sketches by Eugène Delacroix informed by Byron’s work. One of those paintings, The Combat of the Giaour and Hassan, was once believed to have been owned by Alexandre Dumas, père. An entire history of a woman, under the ownership of men.

Women have always played a central role in building society, yet here we are, even today, our word and our testimony deemed unbelievable, our work undervalued. Even more so if you are an individual of color, nonbinary, queer, trans, an immigrant, Muslim, Hindu, Sikh, Jewish, et al intersections of identity. Because of millennia of this hegemony—of this racial and gender inequality, we don’t just live in the patriarchy, the patriarchy lives in us. And if you believe, as I do, that a just and exemplary society is one free of discrimination, where each human being is treated equally, we must—all of us—deliberately, consciously work toward that goal. A very simple step in that direction is this: recognizing that for too long the spotlight has shined on too few and too many stories are relegated to the margins.

One doesn’t need to dig too deep—indeed you can simply scratch the surface of history—to reveal the stories of countless women that remain untold, their names and achievements unrecognized. I wrote this story to help change that. That’s what Khayyam seeks to do when she first comes across the intriguing possibility of Leila: unearth a treasure that deserves its moment to shine. And while she advocates for Leila’s story, she finds that she’s fighting for her own story, too.

Leila and Khayyam may be figments of imagination, but Byron and Delacroix and Dumas are very real men whose lives and works we know. We’ve read their letters, reveled in their art and genius, too easily excused their shortcomings. In writing Mad, Bad & Dangerous to Know—about two fictional women whose lives intersect—I felt a profound sadness for all the real genius we failed to celebrate. For all the art we will never see and the stories we will never read because their creators were not history’s conquerors, because their lives were deemed unworthy.

History doesn’t need to be an exclusionary tale. Our lives and worlds are richer for the diversity inclusion brings. The present always holds the power to write history. Let’s write the truth. There is room enough on our shelves and if you find you’ve run out of space, construct a new bookcase. Build another library. Dig deep to reveal the wrongs of the past, so we can write this world as it should be. So we can right this world. Period. 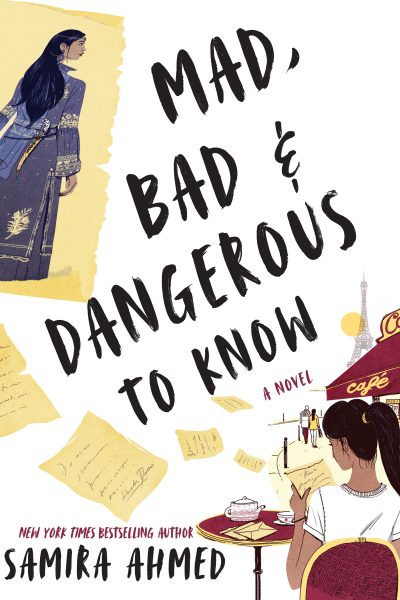