Ed Lin is a journalist by training and an all-around stand-up kinda guy. He’s the author of Ghost Month, out this July from Soho Crime. Lin lives in New York with his wife, actress Cindy Cheung. 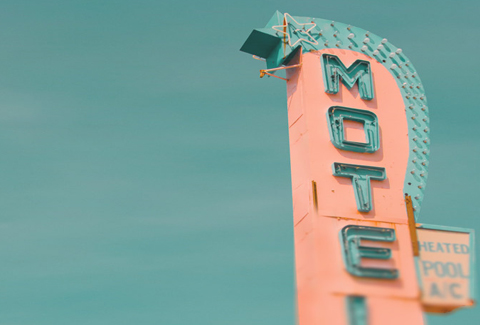 Like a lot of second-generation Americans, I am the son of parents who owned a small business. A motel on the New Jersey shore, to be exact. A crappy one, to be more precise. Typically, when the parents own a small business, the kid is employee #1. I was fortunate enough to have an older sister, so I was employee #2, but that was hardly a respite.

I was assigned to rougher tasks. Duck-walking in the dim crawlspace underneath the rooms to help my father solder over cracking water pipes. Sweeping up post-party beer cans, broken glass and bottle caps in the huge parking lot—there were about 50 rooms spread over two wings and each room had its own space in front. Whoever invented the stay-on-tab, thank you, but you did it too late.

The real funny guests were the ones who chucked beer bottles into the pool where they’d sink to the bottom and roll down to the deep end. Too deep for the pole net to reach, so I’d have to jump in to retrieve them, blood pounding in my head at 10-feet under and feeling around for blurry bottles.

Sometimes I’d be lucky and find half-decent porn in the garbage. Even so, the job wasn’t worth it. Can I even call it a job? No sick days, no holidays (in fact, those were even busier), no pay. Having Asian parents also meant no health care, because they don’t take you to the doctor when you’re sick or hurt. Our living quarters were attached to the motel—no dilly dallying when work is only steps away. One door in our living room led to the kitchen. The other, to the front desk. Open that one and bang, I was on. I was always on.

Sure, I manned (boyed?) the front desk, too. Back then, when you ran someone’s credit card over the carbon slips in the chunky metal manual imprinter, you had to call in the sale to the credit-card issuer and get a confirmation code that ensured the payment was good. About 10 to 15 percent of these cards were maxed out or cancelled. Almost every check written was bad. People lied their asses off. The worst were the ones who paid cash for a room and later tried to get their money back after they’d taken a leak, a dump and/or shower. My sister and I recorded customers arguing with our parents over a refund and laughed at them over and over. The most hysterical tape was that of the woman who broke down crying, saying she had no money left and was alone in the world.

The people I worked with, people we actually had to hire, were a carousel cast from the school of dropped-out-of-school. Some stand out in my memory.

Mike and Mark, two local ropey white dudes, washed sheets and towels in the laundry and picked up trash with me. They were almost twins. Both wore tanktops (which are banned from all decent Jersey establishments) and cut-offs. Mike had black hair and was generally clean-shaven while Mark had brown hair and a walrustache. They were in their early 20s and talked constantly about the procurement of p***y, beer and pot. If it weren’t for them, no other adults would have talked to me about sex, alcohol or drugs.

Life was a joke with Mike and Mark, except for smoking. Both were two-packs-a-day men, but they said they hated it. Mike told me, “Smoking is a dirty, disgusting habit. If I ever see you try a cigarette, I’ll break your goddamn arm.” Mark said, “And I’ll break your other arm!” They were serious even though they were puffing away at the time. Years after they quit, I saw Mike minus Mark at the arcade and I let him take over for me at Tempest. He looked drugged out, all skinny and scabby.

Things didn’t turn out so well for Mike, but at least he got to leave the motel. Everybody got to leave, one way or another.

When I was trying to write my first novel, I felt like I was stuck at that motel, tipping the putrid rainwater out of garbage cans, cleaning vomit-filled toilets, knocking on doors, telling hungover jerks that it was time to get out. This was long after I learned how to have healthy relationships with other people, alcohol and drugs.

Everything—scenes, characters, stories—led to that place, my first workplace, the dead-end job that didn’t end. It loomed large in my mind like a traumatic former life. As anyone who has cultivated good karma can tell you, when a soul doesn’t learn lessons from its last incarnation it is doomed to repeat that life again. I wouldn’t be able to move on until I faced that life head-on by writing fictionally and yet truthfully about it, so that was exactly what I did.

I rowed into the storm before I could find the shore. Thanks to Mike and Mark, I had both my arms.

* Ed. note: This is an occasional series featuring essays about the various jobs, some good, some not as good, that writers have held over the years. Go here to view more essays. Would you like to contribute? Email us.