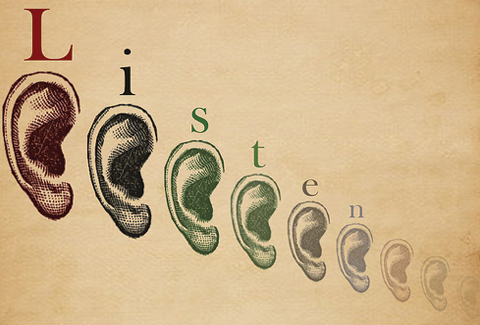 Listening to Your Characters

“The poor novelist constructs his characters, he controls them and makes them speak. The true novelist listens to them and watches them function; he eavesdrops on them even before he knows them. It is only according to what he hears them say that he begins to understand who they are.” —André Gide

This should really be titled, “Listening to (and watching) your characters,” because often they’ll show us something about themselves and your story by doing something rather than by talking. But who am I to argue with André Gide? He’s right. Most of the time they explain themselves by talking.

It’s hard for some beginning writers to understand that character can take on lives of their own, that they can surprise their own creators. All I can say, is take my word for it. If you’ve put some work into your fictional people, at some point in the writing of your book, they will begin to move around on their own. Like two-year-olds, they’ll develop wills of their own. They’ll become sharper and sharper in your mind. On occasion, they’ll take charge of the book.

It happens every time, even if it doesn’t happen every day.

The key, I think, is for the writer to explore the characters thoroughly and then remain flexible and open. Michelangelo once said something to the effect that the way he created a sculpture was to cut away all the extra marble. In other words, as far as he was concerned, the form was already in there, hidden in that block of stone, waiting to be brought into the open air.

Many, many writers say they feel, when they’re writing, that the story already exists somewhere, complete and perfect, and their job is to find their way to it and get it down—as opposed to making it up. And since stories are really just characters doing things, the way the story often presents itself to a writer is through the characters.

I know this probably sounds sort of New Age, and I’ve made a determined effort in this section of the site to remain practical and to stay away from lighting candles, burning sage to clear the negativity from the corners of your writing space, hiring a professional channel to converse with your characters, and some of the other semi-mystical rituals some people recommend to open a time and space for creative energy. (To be honest, though, if any of these things helped me to prepare myself for writing, I’d be in line at Costo, buying candles in bulk.)

I’ll admit it: I don’t have any idea how these people I make up suddenly begin to move and talk and think. All I know is that when it happens, I should grab on for dear life.

When they start to talk, I’ve learned to listen.

Here’s an example from my own writing, which I’ve chosen not because it’s particularly wonderful, but because it pole-axed me when it happened. (I could have said, “When I wrote it,” but it didn’t feel like I was writing it at all. It felt like I should have learned shorthand to get it all down fast enough.)

Not long ago, I wrote a graphic novel. Its central character is a beautiful sixteen-year-old girl named Angel, who happens to kill people for a living. Other than that, she’s a relatively normal girl–if anything, she’s unusually socially backward, uncomfortable with intimacy of any kind, and uneasy around boys. (There’s a reason for this that the reader learns later in the book.)

One of the boys in the story falls in love with her. After they’ve shared a couple of near-death experiences, he gets personal. He asks her how she feels about killing people. I had meant simply to write a scene in which Angel evades the question, demonstrating how difficult it is for her to share anything that really means anything to her. Instead, this is what happened.

The boy, Solo, presses her to answer the question. He says, “So?

“So what did I feel?” Angel says. “Not much of anything. I was scared at first, but then I realized how helpless I look, and I relaxed. It wasn’t that hard, usually. People die easy.”

“Yeah, but it’s kind of odd. I mean, people sell their time to stay alive, they sell themselves, they fight like cats when they feel threatened. But when it comes time to die, there’s no high wall there, no big burst of music, not even a dotted line. Whatever it was that made them alive, it just slips away. Like steam, you know? You lift the lid on a pot of hot water, and steam escapes. And then it’s gone. It doesn’t hover over the pot or go wooo-wooo or anything, it just vanishes. Dying is kind of like that. The livingness evaporates without even a poof, and what’s left is meat.”

He puts a finger on the tip of her nose. “What a romantic chat.”

“Actually, I didn’t. But you don’t want to answer the question I did ask.”

No matter what your critical reaction is to Angel’s speech, the point is that I had no idea it was coming. When it was finally there, on the page, I stared at it for three or four minutes. My reaction was, pretty much, “Whaaaaat?” And then bang, it opened up an entire aspect not only of Angel’s personal world, which is pretty rough, but of the physical and moral world in which the story takes place. And it also revealed to me that Angel needs to defend herself against the full knowledge of what she is, and this idea, this conviction that life is as ephemeral as steam, is one way she does it.

That speech affected the way I wrote Angel throughout the book. And there were similar moments with every major character in the book, and most of the minor ones.

This happens in every book. If it hasn’t happened to you, yet, keep writing. It will.

Here’s the kicker: Sometimes what a character says or does will stop you cold. It’ll wreck your scene. It’ll make you realize that you can’t make this character do what he or she is “supposed” to do. Your plot itself may be in danger.

When that happens, you have only two choices, as far as I’m concerned. You can back up and try to create an entirely new character, one that will play your way, or you can throw out your much-cherished story point and go with the characters.

If you ignore your characters’ resistance and force them to do what you want, you’ve stopped writing a novel. You’re staging a puppet show. You’re in danger of writing the kind of plot-driven drivel I referred to earlier, in a piece you probably skipped: the horror movie where all the characters are trapped in a house with someone or something that’s trying to kill them, and they all decide it would be a great idea to go to their rooms and spend the night alone. Where they can be killed one at a time. Where they haven’t got the chance of a paper plane in a hurricane.

It may seem like it boils down to a choice between characters and story: preserve that plot, and if you have to, ignore your characters. But I want to suggest strongly, one more time, that the truth is that story is what characters do.

Listen to your characters. You ignore them (or mess with them) at your peril.

Ed. note: This is the twenty-first post in a series. Check out the Table of Contents to see what’s in store, and be sure to come back next week for a new installment.