By now, you’ve probably heard that Tom Pollock’s This Story is a Lie is an utterly absorbing, fantastic read.

But we wanted to give you more context regarding the book’s origins and concepts, so we asked Tom a couple of questions and he was gracious enough to respond with answers that are, as is his custom, smart, insightful, and fun to read.

I call it a thriller about murder, math and the mind. It’s about a 17 year old math prodigy called Pete, who suffers from severe panic disorder. He gets through each day with a mix of humour, math and the help and love of his mother who’s a government research scientist.

When, at a ceremony to honor her for her work, Pete’s mum is put into a coma in a failed assassination attempt, Pete is thrust into the heart of a terrifying conspiracy, where he must grapple with his condition while trying to solve the mystery of who is attacking his family, and ultimately of his own past.

This Story Is a Lie has three central themes: mental illness, math and spies.

I’ve lived with anxiety disorders, including an eating disorder, and panic attacks for most of my life. I wanted to write a story where the main character shared those experiences, and which rendered them faithfully, but where they weren’t the primary focus of the plot. Because one of the things your brain can sometimes tell you when you have a mental illness is: ‘this is all you are, this is all you will ever be, this is what your life is about.’ But that story (forgive the cheesy roll-credits title reference) is a lie.

Writing a book about a math prodigy was pure wish fulfillment for me. I’ve always been awed by math in a kind of celestial-music, language-of-the-universe kind of way, but never displayed any aptitude for the nuts and bolts, so getting to write about someone who was awesome at it, was really fun. Plus, I’ve always vaguely thought there was something inherently mathematical about story – we talk about them having an ‘arc’, and that’s a geometric object.

As for spies. I just love spy novels. I go to sleep most nights listening to a John Le Carre audiobook. Plus, an espionage theme meshes really well with the other two themes. Math fits well with code and code breaking, and an atmosphere of paranoia and conspiracy goes great with the anxiety theme.

Well, as mentioned, while the mental illness part was largely based on my own experience (although I consulted some others) , the being-a math-genius part was sadly not, so I had to do a lot of research into math, and particularly into 20th C. Austrian logician Kurt Gödel, who’s fascinating, but tragic life story looms in the background of the book. Also there was research into spying: trade craft, kinds of codes, that was super fun.

This is always a hard question to answer, because the truth is I think I’m influence by basically everything I read, but here are some salient ones that spring to mind:

Patrick Ness, especially The Rest Of Us Just Live Here, is a really beautiful example of how to write mental health into a novel where that isn’t the be-all and end-all of the narrative, and I really looked to that.

VE Schwab’s Vicious was an inspiration as a structurally ambitious thriller that weaved together different time periods in different orders, which is something This Story Is a Lie does.

The way John Green draws out the metaphorical resonance of Kantor’s discovery that some infinities are bigger than others in The Fault In Our Stars was definitely in my mind when I was setting out to do the same for Gödel’s proof that even math has holes in it.

There was one scene that got cut where the spy agency is planning a drone strike and Pete has to try to talk them out of it by calculating the odds of them saving lives if the target was a terrorist vs the odds of killing an innocent person if they’d misidentified him.

I wanted to explore the idea that when the government becomes convinced there are terrorists who have the intention and the ability to kill thousands, then they have an incentive to kill anyone they think might be one, even if they aren’t sure, because the consequences of letting them go are so potentially terrible. And that this incentive can lead to lots of innocent people getting killed as a result of poor intelligence and misidentification, but ultimately, I cut it because it wasn’t advancing the plot.

First off, I hope they feel exhilarated, and entertained and that their hearts are beating out their chests, because that’s what every thriller writer wants?

It’s funny – I do a bit of work as an ambassador for a mental health organization called Talklife, and one of the things that involves is writing non-fiction about my experiences with mental illness (like this one: https://www.theguardian.com/society/2018/apr/28/bulimia-hidden-in-men-pig-out-puke-after-gym-diagnosis). And one thing I’ve noticed is that people respond to such pieces with a lot of interest and sympathy, but not so much empathy. They stay at emotional arms-length. Fiction is completely different, fiction people immerse themselves in, they soak their hearts in the experience, that’s what it’s for, and I hope This Story Is a Lie lets them do that.

“Incredible. My mind is blown.”

–Katherine Webber, author of The Heartbeats of Wing Jones 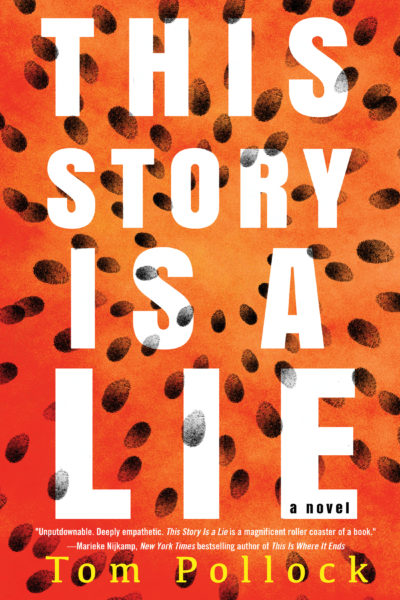