An Interview with Agnete Friis on Her Solo Debut 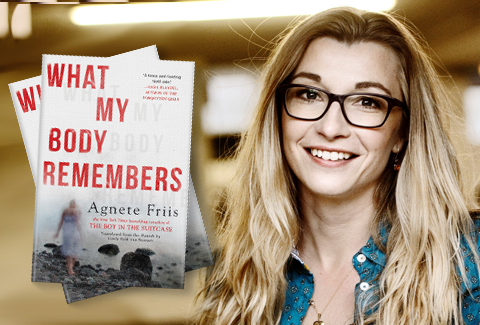 A conversation between Soho Press Marketing and Publicity Director, Paul Oliver, and author Agnete Friis on her solo debut What My Body Remembers, a psychological thriller to be released May 2, 2017 from Soho Crime.

Paul Oliver: It’s a bit strange calling one of Soho Crime’s all-time bestselling novelists a debut author, but What My Body Remembers was your first outing without fellow The Boy in the Suitcase author Lene Kaaberbøl as your wingwoman. Was there anything that surprised you about the solo writing process?

Agnete Friis: It has been a very different experience writing alone. When cooperating with Lene, we always started out outlining the story in great detail before the actual writing. If we did not plan ahead, we would have quickly been writing two very different stories. But when you are writing alone you have the luxury of letting the character and the story develop as you go along; if it suits you better to turn right instead of left, you can do so, which is a lot of fun. But it’s also a process where you will have to go back, erase and rewrite a lot more to clean up the merry and creative mess you left along the way.

There is also a greater sense of doubt throughout the process, because no one knows the book as well as you do, and you are alone with all the decisions. And when you are writing there are a lot of decisions. In fact, it´s all decisions, and after writing with Lene, who also happens to be one of my closest friends, I sometimes feel like a newly-divorced single parent to a colicky baby. I´m stuck on that loud and difficult little creature of a book, and there is no one else to take care of it but me.
On the positive side, there is freedom. And the immensely rewarding feeling of building something completely on your own, in your own language and with your own intentions.

PO: The current wave of feminist crime fiction, at least at the bestseller level, shares some to-be-expected traits, beyond, you know, the use of girl in the title. Both Gone Girl and The Girl on the Train feature wealthy, attractive women, and a fair amount of sex. Ella Nygaard makes a booty-call or two in What My Body Remembers but it really isn’t a defining part of her character, nor are her looks. She’s also definitively not a bourgeoisie heroine. Why did you create a character so against the “bestseller” mold?

AF: Ella was an interesting character to me, because she is what everybody is afraid to be. Unemployed, psychologically troubled, poor and alone. Denmark is one of the countries in the world with the greatest wealth equality, but that does not mean that there is no sense of hierarchy or social order. And Ella, being at the very bottom of society, feels hostility and pity from “normal” people. She hates the way she is disempowered by well-meaning social workers. They control her money, and more importantly, they control her access to her son, because they see her as a weak parent who could possibly damage her child.
Trying to put myself in her shoes and see the world through her eyes was extremely scary. I wanted to tap into the anger Ella would be feeling after living a whole life depending on the system for almost everything. And I wanted to somehow set her free.

PO: Running through the plot of What My Body Remembers is a dialogue about the foster care system in Denmark, which Ella, now 27, has been a ward of since her mother was murdered and her father convicted of the crime when she was 7. Her son too, because of Ella’s PTSD, has spent time in foster homes. What is it about these various social systems that interests you?

AF: In every society there is an ongoing discussion about “the right system.” How do we care for the old, the weak, the unemployed, the less fortunate children and the refugees? But the first thing we need to realize in these discussions is that there is no perfect system. There is conflict within every system, and there is no such thing as a free lunch. There will be casualties of friendly fire, no matter how you choose to organize society.
Ella is an example of how these imperfections play out. She needed help from the system, but is left with an disabling dependence on the very people who try to make her a whole person. Ella has to fight hard to free herself—and her son—from the past.

AF: Religious extremism is in my opinion one of the most frightening things in the world, because of its power to separate people to the extent that we don´t share the same reality. It has always been a mystery to me how people who believe doomsday is close get up every morning, feed their children, redecorate their living rooms and go to their ordinary jobs. I was curious as to what made these very religious people go on living normal lives while expecting the eminent destruction of the rest of the world. How can you live without nightmares if you truly believe your next door neighbor very soon will be punished for all eternity for divorcing his wife or receiving a blood transfusion? That sort of split reality is immensely scary to me, because it underlines how completely foreign we can be to one another. Religion at its worst is a force that can make parents kill or disown their own children for not obeying religious rules. I find that terrifying in the deepest and truest sense of the word.
In What My Body Remembers, one of my characters, Anna, is a former Jehovah’s Witness and is caught between the nightmarish beliefs in Armageddon she was raised with and the more common shared reality of most Danes. Not succeeding in closing the gap, she is living somewhere between the two different worlds, vulnerable and isolated from both her former community and the small-town people she is surrounded by—a vulnerability that proves to be fatal.

PO: Ella Nygaard is, to me, one of the most realistic characters I’ve encountered in fiction. Her struggle for dignity and to keep her small family of two intact is heartbreaking and fraught with its own tension, but you’ve upped the ante a bit and infused her with a serious edge. She kidnaps her son, physically lashes out at people who get in her way, and behind all of that is the intrigue of her damaged memory, coupled with PTSD-induced seizures born of the violence in her past. She’s also funny, self-deprecating, capable of real warmth, and above all sincerely concerned with her son’s happiness. This is one complex 27-year-old on the lam. Where did she come from?

AF: Authors are often asked how much their character is like themselves. To me at least, every character I have ever written has been some small part of my own personality condensed and enlarged and twisted into something and someone else. And for Ella especially, I am very sure where she came from, because she is the part of me afraid of failure and of being a social outcast. I think we all harbor that fear somewhere in our human nature. She is also the small paranoid part of me always afraid that my childrens’ teachers eventually will report me to social services for being an unstable and unfit parent. After all, society is one big machine disciplining us into behaving acceptably, according to written and unwritten rules. I think we all fear falling out of grace and being isolated from our flock. So when writing this book, all I had to do, really, was imagine everything in my life gone horribly wrong in all the areas I really want to succeed, and that’s where Ella turned up, complete with her dark twisted past and a deep sense of being worthless. She is angry, frustrated and ready to give up, if it wasn´t for her son Alex, who is the only person in the world who depends on her and sees her as anything but a waste. He is her last shred of dignity, and the one thing she can´t survive loosing.

PO: The character that you and Lene created, Nina Borg, has been criticized for her devotion to her convictions over her family. Critics have said that she is a tireless social worker but a bad mother. She has also been praised as a feminist triumph, a woman devoted to her work and society, just like countless tough guy cop creations in crime fiction over the years (you know the type: tough, bitter, divorced, hard-drinking but with a heart of gold). In What My Body Remembers Ella Nygaard is a very different protagonist except that she too (more so) is struggling with being a mom. What is it about the confrontation between society and motherhood, or perhaps motherly expectations for women, that motivates your creations?

AF: In the western world we are allowed a high degree of freedom in the way we live our lives, but there is one area which is not up for discussion and probably never will be: parenthood, and motherhood specifically. We expect mothers to love without limits. Anything less than that is a personal failure on the mother’s part; to be a bad, cold or unloving mother is just about the worst thing you can be in modern day society. And in a way, it should be. Children have real trouble growing into the world without caring and responsible parents. If you treat your child badly, social norms and standards should make you feel damn guilty, if guilt doesn’t exactly come naturally to you.
But love without limits is a tough demand. Women will from time to time fail to love and care for their children in the way mothers are supposed to. Most women will also fight to do the right thing even if it is hard or at times almost impossible for them. Because failure is not an option on this particular area. Ella and Nina are both imperfect mothers struggling to be better, and in a way that makes them just like me and most other women that I know.

PO: Back to that hard-drinking P.I. at the bar. He misses his wife and kids yet he doesn’t spend much time with them. Maybe there’s a divorce or one on the horizon. Sometimes he’s late to pick up his kids because of a case he is working on and therefore is slowly losing custody of them, but expresses deep care for them internally. He’s handsome and flirts a bit with the women he encounters on the job. Now replace he with a she. What are your thoughts on the notion of a double-standard in crime fiction?

AF: Well, as said before, our society still regards motherhood as a core achievement for women. It is not quite right having no children, but is disastrous to be a bad mother. In Denmark we call bad mothers for “Ravnemødre”—raven mothers—but there is no expression for bad fathers. The concept has never been important enough to name. If a woman does a bad job with her children, no other achievement can really make up for her failures, while men are allowed to be completely absent in their children’s lives if they fulfill other manly duties: building a bridge, exploring the Arctic, going to war or being a depressed, hard-drinking PI on the search for justice.
There is a double standard in crime fiction, which I find interesting to challenge, but that is not my main purpose when writing characters like Nina and Ella. As an author it is my job to hit my protagonists where it really hurts to get them moving. Mother